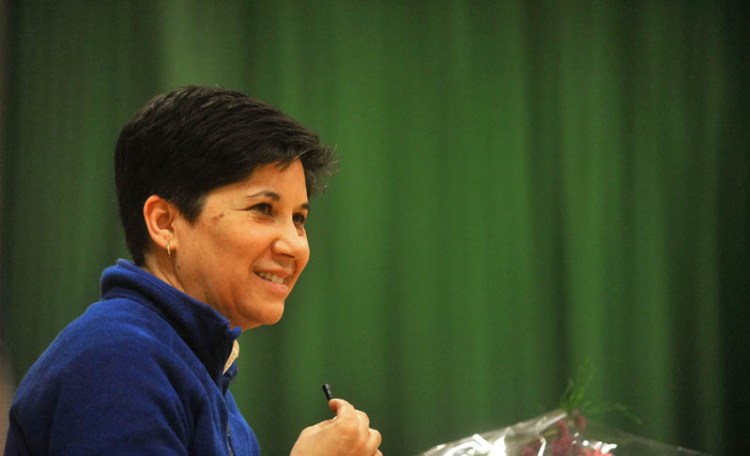 The National Association for Music Education (NAfME) announced that Marisa Weinstein ’83, ’89 MM, Director of Bands at Warsaw Middle School in Pittsfield, Maine, is the recipient of the 2017 George N. Parks Award for Leadership in Music Education. Marisa received the award during the Opening Ceremony at the Bands of America Grand National Championships in Indianapolis on Saturday, November 11, 2017. She is the third member of the Minuteman Band family to have been so honored since the award’s inception in 2011.

“The George N. Parks Award honors an exemplary music educator who embodies the characteristics and leadership that Mr. Parks showed his students every day,” said Michael J. Blakeslee, executive director and CEO of NAfME. “The recipient must have a collaborative spirit, dedication to knowing the students as people, perseverance and enthusiasm, and an ability to instill qualities in students beyond the musical. We are greatly pleased to present Marisa Weinstein with this year’s honor.”

“As a 1984 graduate of the George Parks Drum Major Academy and a 1998 alumnus of the UMass Amherst Graduate School of Music, I am well aware of the tremendous influence that Mr. Parks had on countless young students over his amazing career,” noted Andrew J. Forster, Director of Bands at Messalonskee High School in Maine. “Mr. Parks would be very proud of Marisa Weinstein’s influence on music students and teachers in our state.”

A native of Merritt Island, Florida, Ms. Weinstein began her career at the University of Massachusetts at Amherst, where she received both her Bachelor’s and Master’s degrees in Music Education. While at UMass, she studied conducting with Malcom W. Rowell and percussion with Dr. Peter Tanner. She served ten years (1990-2000) as the Associate Conductor for the Casco Bay Wind Symphony in Portland, Maine, and she continues to actively perform, evaluate, and guest conduct throughout the New England area today.

“When students are willing to risk failure, they learn more about themselves and develop a greater overall appreciation of and for each other.”

Ms. Weinstein is an active member of the Maine Music Educators Association, and she has served four terms as the District chairperson. She was presented with the Association’s “Educator of the Year” award in 2013, demonstrating the visibility of her commitment to her students and her community. Both former and current students of Weinstein’s said that not only does she connect with students on a personal level, but she also holds them to high standards of excellence. When asked about how she defines success in her programs, Ms. Weinstein emphasized the importance of taking risks and standing up for what you believe in: “When students are willing to risk failure, they learn more about themselves and develop a greater overall appreciation of and for each other.”

“I was able to watch my two children blossom under the direction of Marisa. She pushed them to be the best they could be,” shared Warsaw Middle School Principal Sharon Littlefield. “They grew to develop an immense respect for her, and as a parent, I viewed this as her continuing to reinforce the work ethic I wanted instilled in my children. Now, many years later I am once again blessed to watch my grandson fall in love with the teacher that Ms. Weinstein is. . . . I would like to say that this ‘music family feeling’ she creates is due to the time she spends instructing her students as musicians, but as you can see her connections extend far beyond her program.”

“Marisa is a wonderful representative of the spirit of George N. Parks, embodying his caring for students, instructional ability, love of music, and ability to translate all this into a successful music program that enhances the lives of her students and the culture of our school,” added Ms. Weinstein’s colleague Donna M. Chale.

Developed by NAfME and Music for All, the award is named for George N. Parks (1953–2010), director of the University of Massachusetts Minuteman Marching Band at the University of Massachusetts Amherst from 1977 until his death. Considered a national authority on drum majoring, he led the George N. Parks Drum Major Academy®, a summer workshop program for high school drum majors.