The first piano was unveiled Oct. 4 at Hampshire Dining Commons followed by placements in the Campus Center and Student Union. A kick-off celebration for the project was held in the Student Union lobby. 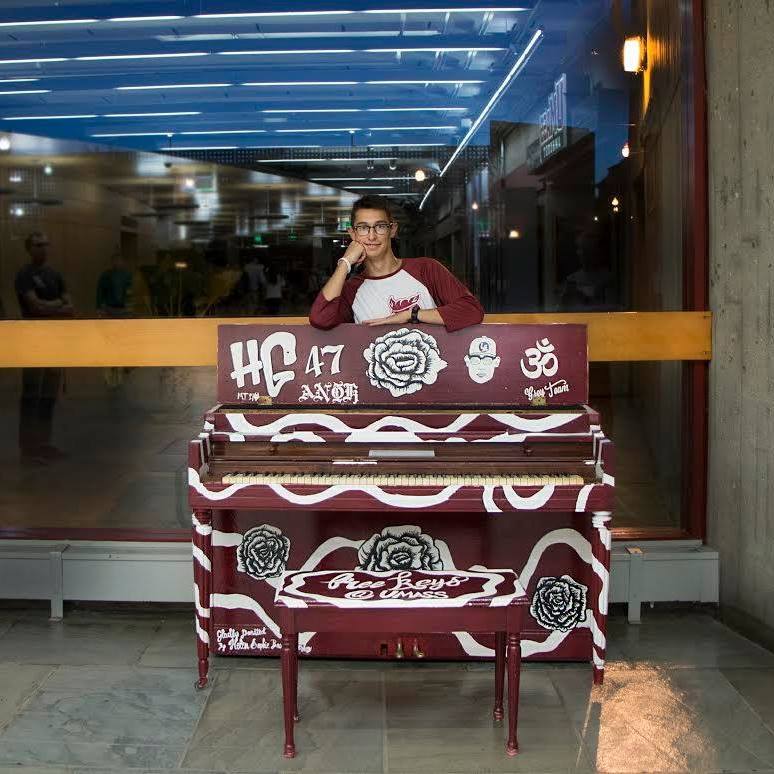 Matt Turcotte, a trumpet player in the Minuteman Marching Band and president of Kappa Kappa Psi (Epsilon Nu chapter) poses with his painted piano in the Campus Center.

Free Keys at UMass, according to project manager Owen Henry, is intended to connect UMass student-artists with the large campus community.Each of the pianos was painted by undergraduates who designed the motif, and all of the instruments are open for everyone to play and enjoy, says Henry, a biochemistry and molecular biology student with a minor in classical piano performance.

The idea for Free Keys came from a flyer Henry saw last year in the department of music and dance.

“It was a page posted to my piano professor’s bulletin board that was cut from a USA Today article on the Pianos for Play project at UMaryland,” says Henry. “This project was also student-led and placed painted pianos around their campus. Someone had written on it in pen, simply, ‘Do this at UMass!’ and that message spoke to me. As a pianist who has enjoyed public pianos while traveling, I was excited by the idea of having something like this on our campus.”

From the beginning, Henry was convinced that the project would take flight.

“Our UMass community is so supportive, diverse, driven, and forward-thinking—it gives students the power to tackle our wildest ideas,” he says. “No matter where you look on campus, you’re bound to find groups of students working on truly incredible projects. I was so optimistic with Free Keys from the start because over the past four years I’ve witnessed wildly successful projects—both my own and those of my friends/peers—that were driven by the vision and work of UMass students.”

The project launched an online fundraising campaign last spring with a goal of $1,000. To date, the effort has brought in $790, which was used for supplies for the student artists, promotional materials and one of the pianos. The other pianos were donated. Remaining funds will be used for upkeep of the instruments and possible expansion of the project, says Henry.

At the same time, Free Keys began posting flyers around campus asking students to submit proposals for decorating the pianos. Open to all students, the competition drew eight proposals. The Free Keys team reviewed the entries and selected three winners: Charlotte Young, who recently graduated with a degree in studio art; Maddy Conover, a senior majoring in studio art and sustainable food and farming; and Matt Turcotte, a junior trumpet player in the Minuteman Marching Band and president of Kappa Kappa Psi, is majoring in English and sustainable food and farming.

“We wanted Free Keys pianos to uniquely convey the UMass student experience in a way that would enhance the campus space—all while sparking questions, conversation, and action from our community,” says Henry.