Band alumna honored as N.H. Music Teacher of the Year 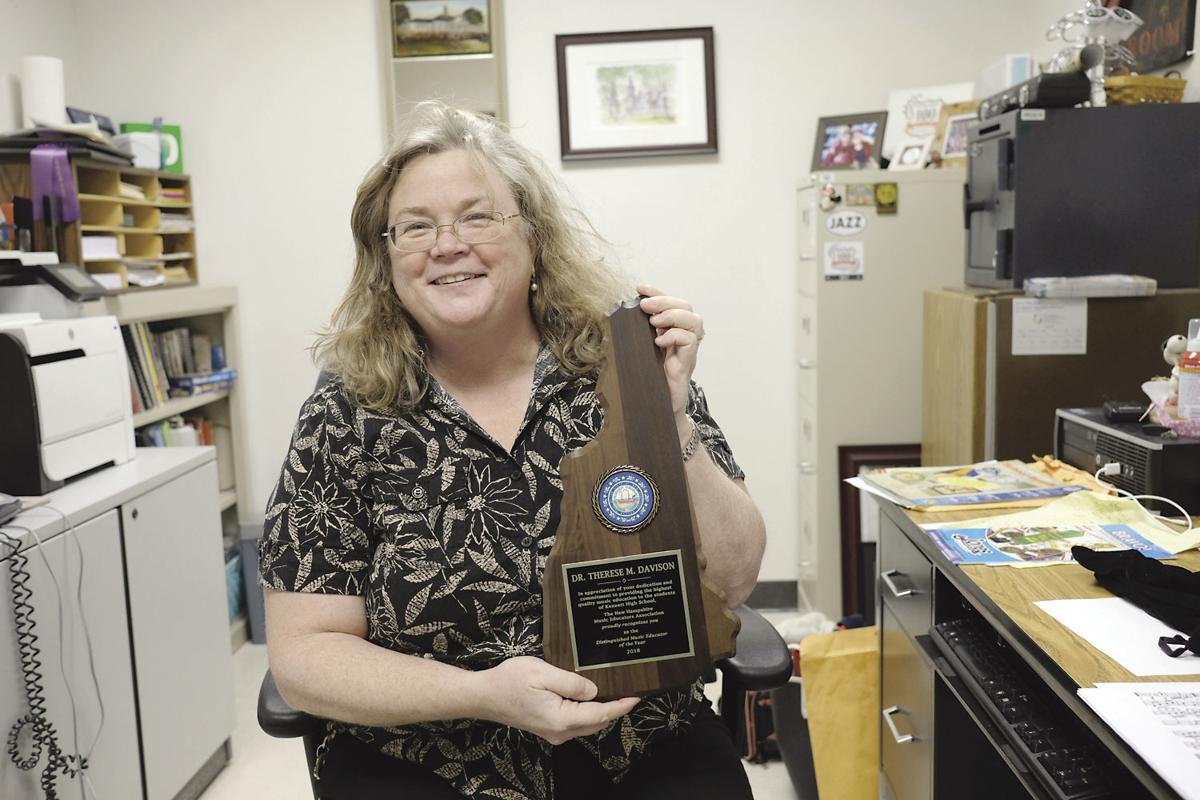 Dr. Therese Davison ’87 got quite the surprise at the annual New Hampshire Musical Educators Association Conference in Concord on April 14 — she was named Distinguished Music Educator of the Year for 2018.

“I was very surprised,” Davison, who is the dean of the educators as the longest serving teacher at Kennett High School now in her 25th year, said, laughing. “I had been dealing with the Conway Crud (flu running through the school) all week long and wasn’t sure I would go. I went and it’s a good thing I did because that’s when they awarded the music teacher of the year.”

Davison had no idea she had won, nor that a colleague from the Lakes Region had nominated her for the award.

“Nobody told me or else I would have been there for sure,” said Randy, her husband. “I think she’s the best music teacher in the state, of course I’m biased.”

Davison said she started to get a clue midway through the announcement of the award.

“They were describing things, and I said, ‘Oh, I did that, I did that,’ and so did other people, too,” she said, smiling. “Then it was, ‘Wait a minute, I’m the only one that did that.’ It was the drum line. It was, ‘She takes her drum line everywhere,’ was one of the descriptors. A friend of mine was sitting next to me and elbowed me and said, ‘I think it’s you, dear.’ I was a little stunned.”

Davison received a wooden plaque in the shape of New Hampshire with the following inscribed: “In appreciation of your dedication an commitment to providing the highest quality music education to the students of Kennett High School, the New Hampshire Music Educators Association proudly recognizes you as the Distinguished Music Educator of the Year 2018.”

“We couldn’t be prouder, it’s very well deserved,” said KHS Principal Neal Moylan Thursday, admitting no one at the school was aware of the presentation either.

Davison, 55, who has been teaching 31 years and the last 25 at Kennett, said one of the things she’s most proud about in receiving the award is that the two music teachers before her at Kennett High — Jean Fickett and Michael Hathaway — also have had that honor bestowed upon them since its inception in 1984.

“I feel like I’m carrying on the North Country tradition by being thusly honored,” she said.

As part of the award, Davison will be recognized by the state Department of Education at the EDies on June 9.

“Kennett Administrators and my family have been invited as guests of the NH Music Educator’s to share their table at the ceremony,” Davison said.

Music has been a part of Davison’s life since he was baby. Her dad, the late Fred Murray, was a band director for 35 years, teaching music in Winchester, Mass., for about 20 years before overseeing the City of Malden (Mass.) School District for 15 years.

“I’ve had incredible teachers,” Davison said. “I like to think it’s my turn to pay it forward. It became pretty obvious early in my life that music was my bag. My dad started grooming me really early to be a music teacher. Proposition 2½ passed and my father’s music teachers went from 30 down to three. I went to school knowing that there would be no jobs. When I went to UMass Amherst, where I was drum majoring the marching band there and I studied under George Parks, who was considered, before his passing, to be the world authority on drum majoring, and I was his drum major, which is why I have the expertise in marching bands.”

Davison was also in the school marching band from fifth grade through high school in Winchester.

“We marched for the Memorial Day Parade every year,” she said. “We had five rehearsals to learn how to march in the parade. Then in middle school, we had the jazz band and I was flown up a year early to the junior high jazz band. I was drum major of my high school band and then when I went to UMass, my freshman year, I was immediately placed as assistant drum major. Of course, I credit a lot of that to my dad and my high school band director, too, and the fact I’d been marching since fifth grade.”

It was the marching band that paved the way to Conway for Davison.

“I was originally hired because they wanted a marching band,” Davison said of her arrival at Kennett. “(Then Assistant Superintendent) Dick Mezquita hired me because in those years we had an award-winning football team and we didn’t have a marching band, and he thought that was ridiculous. Mike Hathaway was a year away from retirement, and everyone knew he was going to retire so they hired me and put me in the open position with the idea of me moving into his position when he retired to start the marching band program.

Davison made the move from the high school in Conway Village to the new Kennett, which is in its 11th year on the campus at the top of Eagles Way.

“This facility is really a joy to work in,” she said.

Davison is proud to be a teacher.

“I think there is an art and a craft to teaching and it takes a long time to get good at it,” she said.

After 25 years at KHS, Davison may be more energized than ever, continuing to stretch the musical boundaries with her students. How does she do it?

“To be honest, it’s the music that the kids make, and it’s their energy that inspires me,” she said. “And, I just got a CPAP machine and that’s going to help, too (for sleep apnea). A couple of years ago, I felt like I was getting too old to do the job. I thought I had chronic fatigue syndrome or something like that, but it turned out that I was anemic and once I got an iron supplement going I was much better. It’s the energy from the music and the energy from the kids that feeds me and then my energy returns to them and feeds them, so it’s this symbiotic relationship. It’s fun and I keep saying it was from an early age that this is my thing.”

from the Conway (NH) Daily Sun