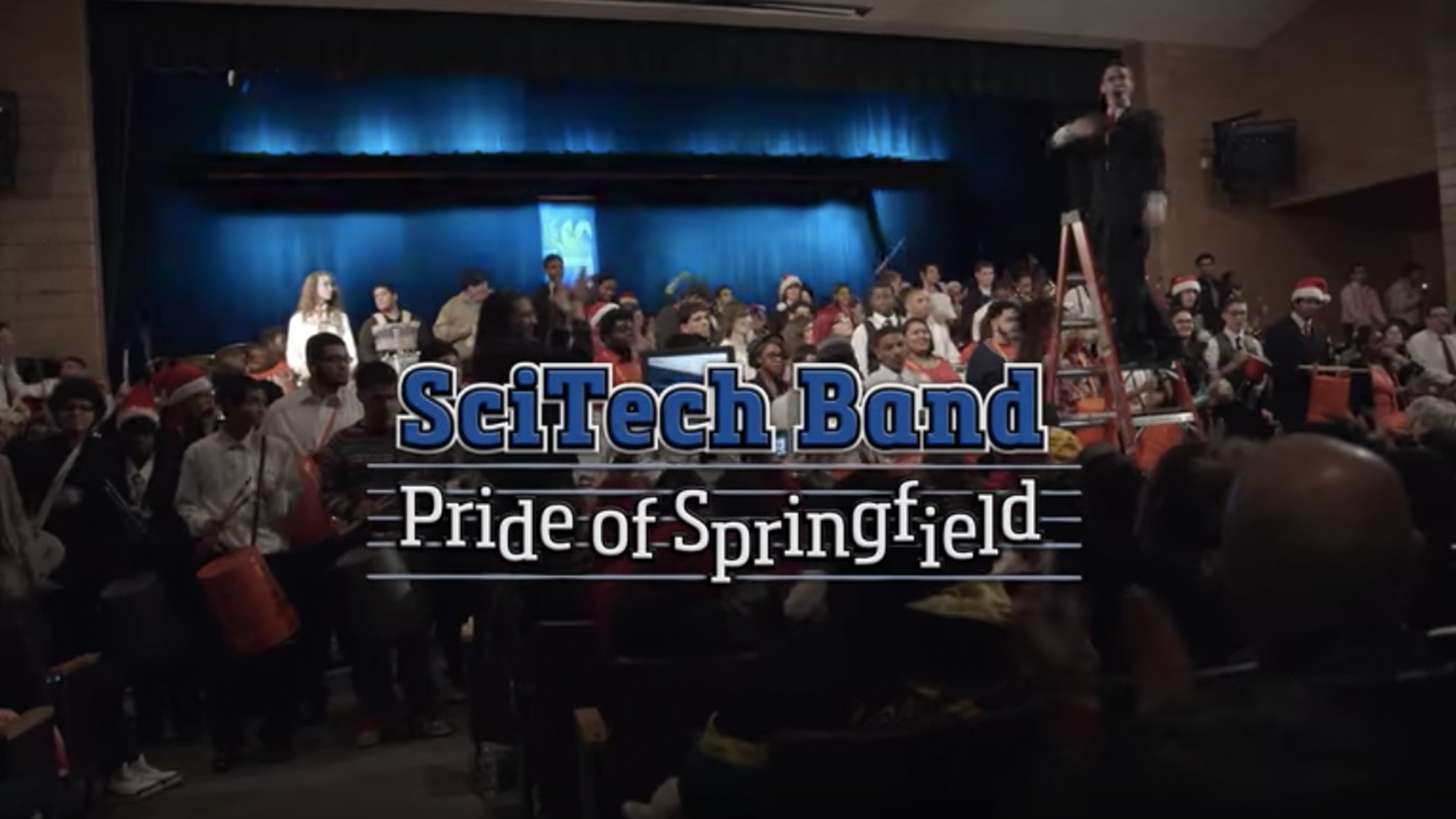 Nine years ago, freshly minted University of Massachusetts music major Gary Bernice ’07, ’10G walked through the doors at the Springfield High School of Science and Technology with a mission to start a band at the underperforming school where 99 percent of the students had never picked up an instrument.

There was no band, there was no curriculum for such a program and there were no instruments, but Bernice was confident that the students had it in them to unlock hidden talents.

Today, there are 500 members of the Sci-Tech Band who under Bernice’s guidance are winning regional and national acclaim while astounding audiences up and down the valley – from Springfield Symphony Hall to the Academy of Music in Northampton.

It was at a fundraising concert held at the Academy of Music that Emmy award-winning and Oscar-nominated filmmaker Larry Hott, who with his wife and business partner Diane K. Garey of Florence-based Florentine Films/Hott Productions Inc., became star-struck by the kids from an urban high school and their passionate and charismatic bandleader.

“The lights were off, the curtain was down and an amazing Afro-Cuban drumming was rising from the orchestra pit,” Hott said. “When the curtain was raised, 75 saxophone players filled the hall. Then the conductor appeared in shadow, and every eye in the band was transfixed on him.”

When he learned more about the band and Bernice’s dedication to the student performers, Hott said he became interested in doing a documentary film exploring a year in the life of the Sci-Tech band, which calls itself “The Pride of Springfield.” Hott and Carey have produced nearly two dozen films for national PBS including the recent hour-long documentary “Frederick Law Olmsted: Designing America.”

With financial support from the Springfield School Volunteers, Hott got $15,000 of seed money to start production for what he envisions as a 20 to 25 minute documentary film to be used for educational purposes by schools and other organizations.

Hott estimates it will cost $80,000 to complete and is working with other organizations to raise additional funds for the project, which he expects will be available on YouTube.

Making the film will raise the profile of the Sci-Tech Band in the community and show what’s possible for other schools around the country that are starting a band, or any other creative endeavor, Hott said.

Hott and his crew are at Sci-Tech’s band room this week as they begin chronicling the behind-the-scenes work it takes to create a concert program with the full 500-member ensemble that will appear all together at the end of the school year.

For Bernice, who was a member of the University of Massachusetts marching band and a protégé of the famed UMass band leader, the late George Parks, the Sci-Tech band is about possibilities.

Bandleader Bernice was the recipient of the 2102 WFCR Arts & Humanities Award for emerging talent. In 2013 he was a quarter-finalist for a Grammy Music Educator Award.

One of the keys to the band’s success, Bernice believes is its philosophy of ownership. “It’s their band, not mine,” he said last week as he was preparing for the start of a new year.

White laminated folders, with each student’s name on them, lined the shelves. And student band handbooks, containing the band rules and mission statement and instructional material, were handed out.

“As proud members of the Sci-Tech Band, we bring together our individual strengths and talents to form a family united by common goals.

We desire to create an environment through music that will challenge and motivate students to strive for excellence in all facets of their lives.

We are dedicated to advancing the principals of leadership, unity and pride, trust, self-discipline, responsibility, critical thinking and creativity through the study and performance of music.”

Goals include: Developing a high-quality performance band; developing leaders for the 21st century who are creative and critical thinkers; fostering an understanding of music as a discipline and a global language, and learning music is meaningful and relevant to student lives inside and out of school.

For Bernice, who has built the Sci-Tech around the concept of family, trust and student “ownership” of the band, he’s happy that the film will help spread “a story that needs to be told.”

“It’s a story that’s unique to us, but it could happen anywhere,” Bernice said. “These kids are amazing, and they don’t know it.”

Hott also sees value in telling the story of the Sci-Tech Band. “If the film gets more students interested in joining a band, brings money into struggling school programs –and maybe even improve graduation rates,” it will be a success, he said.