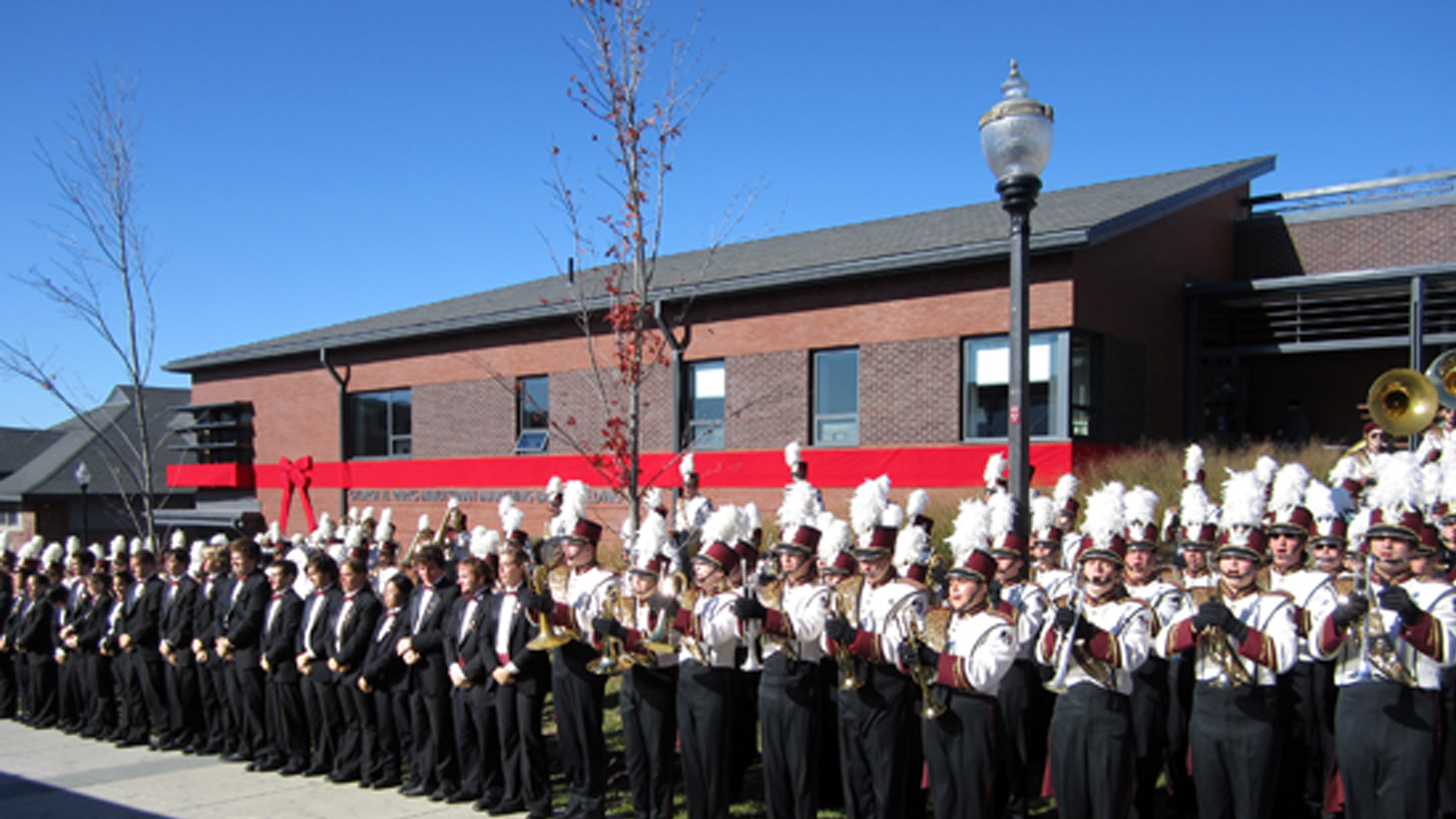 The University of Massachusetts dedicated the $5.8 million George N. Parks Minuteman Marching Band Building in an emotional ceremony on Saturday during which the late band director was remembered for his dedicated leadership.

George Parks, a music professor, led the Minuteman Marching Band to national prominence during his 33-year tenure at UMass which ended with his death on Sept. 16, 2010, after a heart attack while on a trip with the band to the University of Michigan.

As the noon ceremony began, the nearly 400 members of the marching band rounded the corner of the building, greeted with cheers and applause from the crowd of an estimated 500 students, parents, teachers, former band members and supporters as they rose to their feet, many showing their emotion.

“This opens a proud new era in our history,” said Timothy T. Anderson, who now directs the band. Anderson recalled the song “Somewhere” from “West Side Story” and said, “There is a place for us, somewhere a place for us, and it is right here. It is with great pride and honor that I say to you, Welcome home!”

The band had been without a permanent home since 1997 when it was forced to vacate the Old Chapel building due to dangerous structural problems. Parks, the man who coined the band’s motto “The Power and Class of New England,” led the process to secure a new building for the band.

“This is a bittersweet moment,” said former band member Linda Paul Hannum of Hadley. “It is a phenomenal celebration of an incredible collective effort to make this happen.

“The only thing that taints the moment is that George isn’t here to see this,” she added. “He worked very hard and he gave everything to get this facility built,”

During the planning of the building, Parks learned that it would be named for him.

“The only time that I ever experienced George to be speechless, is when I called to tell him that the building would be named in his honor,” said UMass Chancellor Robert C. Holub.

“My hope is that we can continue to build the ‘Power and Class of New England’ and to make sure that we fill the inside of this building with something that George would be proud of,” Hannum said.

“This building provides a permanent and visible place on campus for the band, and this band is one of the shining gems of this campus,” Caret said.

Steven Oster, a former band member who graduated in 1984 and now lives in Fairfield, Conn., said the new building was a far cry from the Old Chapel.

“We had wonderful times at the Old Chapel, but this building is modern and spectacular. I wish they had something like this when I was here,” Oster said.

Money for the building came from a combination of $4.5 million in campus funds and $1.3 million raised through private donations.

Designed by Kuhn Riddle Architects of Amherst, construction of the new 15,000-square-foot building off Commonwealth Avenue began in the spring of 2010 and was completed in May of 2011.

The building includes a large indoor practice and performance space which can accommodate the entire marching band. There are also smaller group practice spaces and rooms for storage of instruments, uniforms and music, as well as an office and conference space.

Due to its environmentally sound design, the building is certified under the U.S. Green Building Council’s Leadership in Energy and Environmental Design (LEED) program.

Third-year student, band member and travel manager Stephanie Mullane said she is excited about the new facility. “It makes things so much easier now that we have a home. And it really is like a home. This week when we had the power outage, we had a sleep-over here,” Mullane said.

Jeanne C. Parks, widow of the late band director, said her husband always believed in the band’s excellence and even during tough times he never gave up, he just regrouped. She thanked those who attended the dedication of the building, and added, “Enjoy it, take good care of it and think of George every once and awhile as you walk in.”