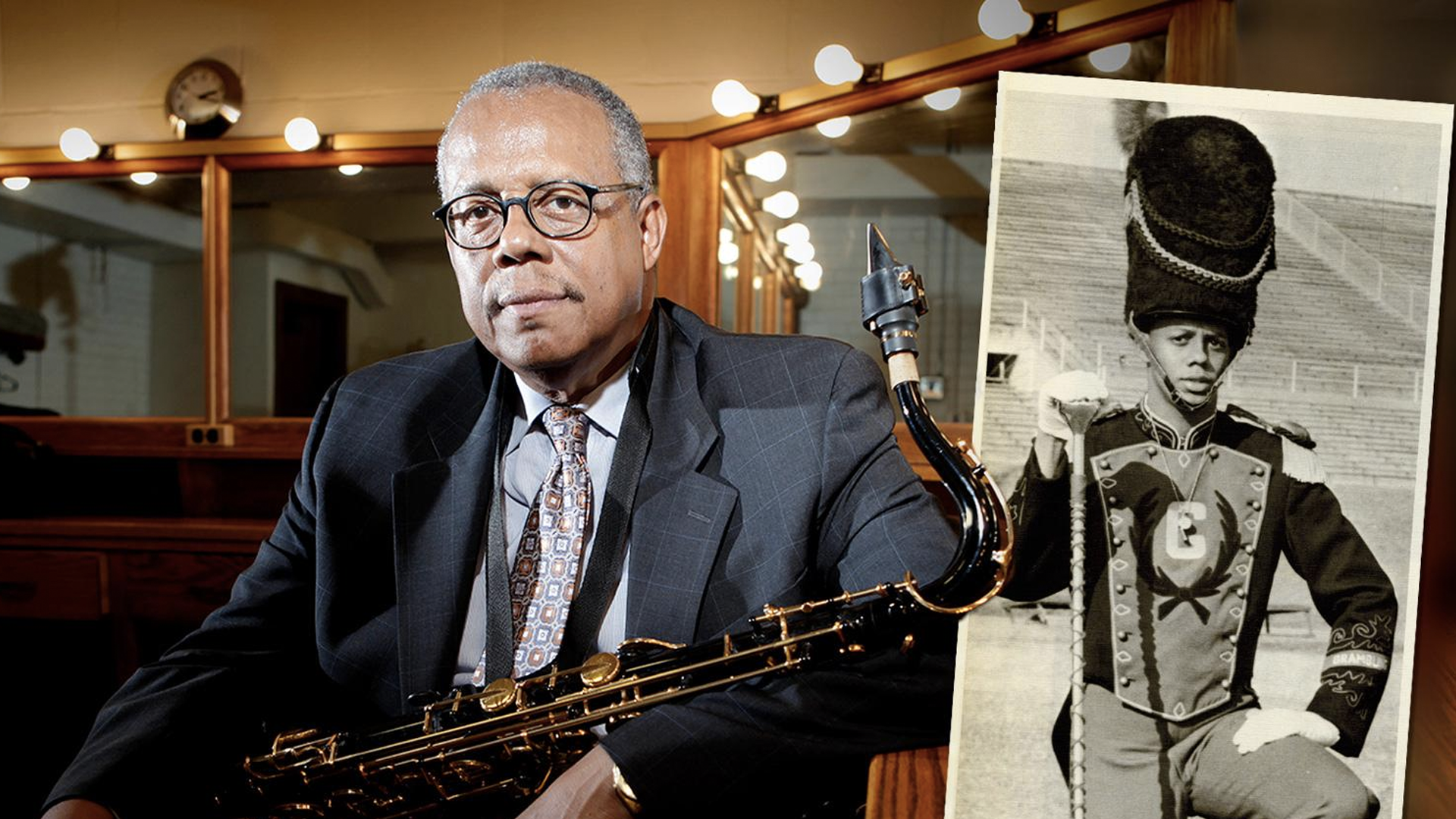 UMass Fine Arts Center director Willie Hill performed as Grambling State’s drum major in the first-ever Super Bowl in 1967. Hill will be featured prominently in a CBS special (Feb. 5) about halftime shows past and present.

It’s difficult to argue against Beyoncé’s greatness, it is true. But skimming through clips of marching bands past elicits one big question about the Super Bowl halftime shows of today: with all the fireworks and special effects, have we strayed too far away from the music of it all?

The drum major charged with the first ever halftime show at the first ever Super Bowl, UMass Fine Arts Center director Willie Hill, humbly says we have.

“You really have to spark an interest in people — it’s not just about the band, anymore,” the renowned saxophonist says sadly, referencing society’s short attention spans. “Times have changed and tastes have changed.”

Indeed times have changed since that first halftime show in 1967, during which Hill — then the drum major for Grambling College, a historic black school — led his band onto the field at the Los Angeles Coliseum alongside the band from University of Arizona, then a predominantly white school. The years leading up to the show were fraught with riots and the unraveling of Jim Crow, yet the two bands — under Hill’s lead — joined together to form the geographical outline of the United States.

Now 69, Hill will be featured prominently in a CBS special about halftime shows past and present, slated to air on Feb. 5. It honors the 50th anniversary of that major first in Super Bowl entertainment.

That first halftime show is referred to as “monumental” because of the obvious symbolism, but to Hill, this show was like most others — he wanted to “kick some butt.”

“It was just another performance that we had to make sure was top-notch,” he says.

In that sense, Hill maintains, music is “colorblind.” It either sounds good or bad — it’s not about how a musician looks or the color of his skin.

And it was that same pursuit of perfection that saw him rise from a poor household in the segregated deep south to an internationally known musician, teacher, and administrator.

Hill was born in 1946 in Mobile, Alabama. Seeing that Alabama’s state and municipal governments were passing laws like the one Huntsville’s City Council passed in 1956 — which banned blacks and whites from playing games together, including card games, pool, and baseball, among others — it shouldn’t come as a surprise that the 1967 halftime show brought Hill his first real interaction with white people.

UMass Afro-American studies professor John Bracey, who was active in the Civil Rights movement in the ’60s before he started working at UMass in the ’70s, remembers the time as a tense one.

“Polarization is at its heights,” says Bracey, adding that at the time, there were no black quarterbacks because they were deemed not smart enough to play the role. There weren’t any black coaches or administrators, though there were a few black players on the field in 1967. “The schools weren’t fully integrated yet so there wasn’t a pipeline for black players.”

Todd Crosset, associate professor of sports management at UMass who specializes in sports and race, says more black players started hitting the field in the ’60s, but they played on the periphery. Crosset says that good changes began happening in the ’60s, but issues of racism still exist in the industry today.

“Your sense of history is sort of distorted if you think everything came together in the 1960s,” says Crosset.

No one in Hill’s family had gone to college before, and so he says he never even thought about it as an option. It was his dream to work in the same factory as his father, until his junior high band director, Mr. Miller, acknowledged his musical talent and encouraged him to continue his education.

“I went home and told my mom, and she was like, ‘College? Does that cost money?’” Hill remembers.

Grambling ended up awarding Hill a significant scholarship, but he still had to come up with $250 to start. “That was like asking for $25,000 at that time for my parents,” he says. “My parents agreed to borrow the $250, and then they said, ‘Son, you’re on your own after this.’”

During school breaks, Hill fit in work at an Alabama shipyard. He worked the dry dock, helping repair ships upon their return from oversea trips. The work, he says, was hard and hot. “That was a motivator to leave that environment and be successful,” says Hill. “I knew that couldn’t be my destiny.”

Because of his leadership skills, Hill says Grambling started grooming him for the drum major position early on. At first, Hill says, he had no interest in becoming drum major, as he was more interested in playing than putting down his instrument. But Grambling’s marching band director came in with the hard sell. “He said ‘you’ll get a full scholarship,’” says Hill, who was 20 at the time. “And he said, ‘just look at all the beautiful ladies who’ll want your attention.’”

And so Hill accepted his fate and assumed head drum major in fall of 1966.

Not long after, he started dating his future wife Beverly and Grambling got the call that landed them alongside UA’s marching band at the football championship later dubbed the Super Bowl.

“We came together and that was the history-maker,” says Hill, recalling the strangeness of working with “the other” after so many years of only working with black people.

“We’re all one country — that’s what sports does,” says Bracey. “That’s the way that would present itself visually.”

Bracey says that there was so much going on in black culture and sports at the time that the first Super Bowl likely was overlooked. The Bayou Classic, on the other hand, was a big deal.

Bracey, 74, says his mother was a professor at Howard University and so he got a front-row seat to the marching band culture in the south. It was around the same time as the first Super Bowl, he says, that predominantly white marching bands started to see black marching bands in action and borrowing moves. Much like a lot of today’s culture, he says, marching is now an amalgam of the two.

Hill says he was so focused on ensuring Grambling’s band was “on par” with UA’s that he didn’t feel the millions of eyes on him at the time, but “in retrospect, it was mindblowing.” They played Eddie Floyd’s 1966 hit, “Knock on Wood,” he recalls. Sadly, documentation of Grambling’s set is nowhere to be found — UA’s set is searchable online, as is the entire game — though at least the enduring joint performance with both bands exists in photos and video clips.

After finishing top-grad at Grambling, Hill moved to Denver, where he and Beverly both taught music for about 20 years. Feeling compelled for credentials in the whitewashed world he was working in, Hill attended the University of Colorado while teaching, earning a masters and a doctorate in music education. Since then, he’s served as president of both The National Association for Music Education and the International Association for Jazz Education. He took the UMass job in 1999 and moved to the area, and continues to travel the world, conducting and performing.

“Every step of my career there’s always been someone who felt that I was ready for that next level,” says Hill. “And failure was not an option.”