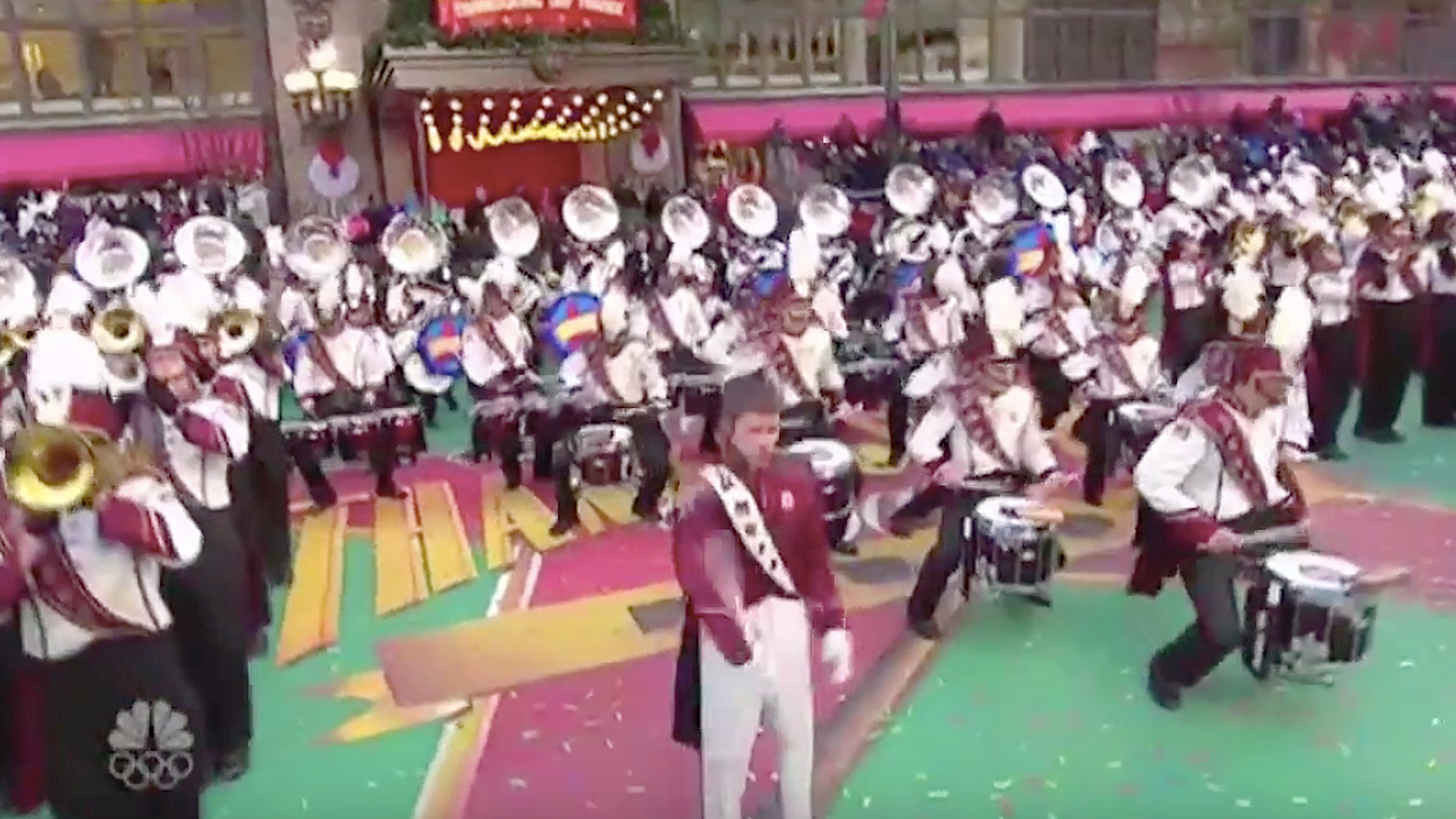 Following a 2:30 a.m. wakeup call on Thanksgiving morning, the University of Massachusetts Minuteman Marching Band emerged from the Downtown Marriott in full uniform with instruments, boarded their buses, and headed to their 4 a.m. NBC rehearsal ahead of the Macy’s Thanksgiving Day parade. After the NBC rehearsal, the UMMB returned to their hotel near Battery Park in Manhattan to pack, before re-boarding the buses at 6:00 a.m. to head to the start of the parade route. By 9 a.m., the Minuteman Band was lined up on the sidewalk by Central Park, watching celebrities and floats such as Fallout Boy, Richard Simmons, Ms. America, the Marine Corps Band, Broadway star Kristin Chenoweth, and the cast of “Duck Dynasty” pass by. Band member excitement built until it was the UMMB’s turn to line up on the street and step-off, with the announcer presenting the band to viewer on TV and along the street.

Along a parade route filled with waving and cheering spectators, the Minuteman Marching Band played “Fight Massachusetts,” “God Bless America,” “Roll Down the Field,” and crowd-favorite “Sweet Caroline.” One of band members’ parade highpoints was playing “Fight Mass” as the band was passing by the large UMass contingent near 55th street, where the entire block of spectators erupted into cheers and chants of “Go UMASS!”

Near 37th street, the UMMB changed from their parade formation into their “Big Noise from Winnetka” formation, in preparation for their live NBC TV performance. At 11:24 a.m., the Minuteman Marching Band performed on the Macy’s Star to over 50 million homes across the US and the world. After the parade, the band gathered at the Post Office steps for a group photo, with excited students beaming from ear to ear. Many couldn’t believe how quicly everything had gone by and how tremendous the experience had been. It was one for the history books and for many who had grown up seeing the Macy’s Parade on TV, it was an adventure of a lifetime.

On Tuesday two days before the parade, the UMass Minuteman Band arrived in Manhattan, and students were permitted to take the evening to explore the city. Many went to see Broadway shows and Times Square, as well as tasting new treats like those found at the M&M store. A good number had never been in New York City before and were simply in awe experiencing “the city that never sleeps.”

Ongoing rain brought the band’s Wednesday morning rehearsal indoors, into one of the Downtown Marriott’s ballrooms. There the UMMB rehearsed their 75-second song, “Big Noise from Winnetka,” which would be broadcast live the next day on TV. That evening, band members were treated to a Thanksgiving feast, courtesy of UMass and Chancellor Kumble Subbaswamy, who was also instrumental in providing the Minuteman Marching Band with brand-new silver sousaphones and baritones for the parade.