Behind the murals: Band alumna dedicates painting to Parks 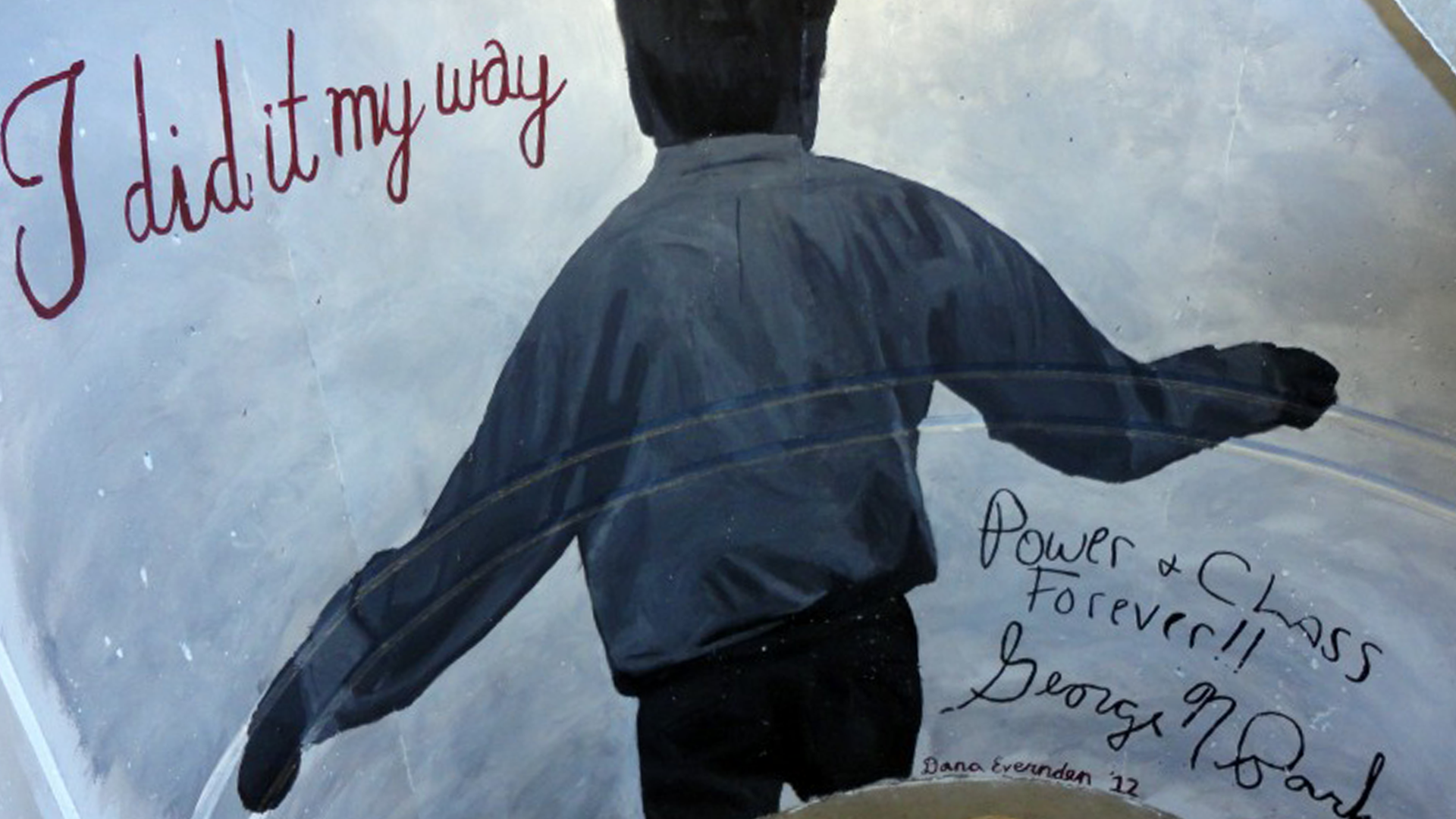 Have you ever climbed the W.E.B. Du Bois Library stairwell in such a rush that you didn’t notice their most unique decorations until after stopping to gasp for breath?

Hundreds of people walk by the murals in the stairwells of the library every single day. Most of these people simply walk past without noticing them, or notice them but do not give much thought to how these murals came to be, or if anyone has the ability to brighten an otherwise dark and dull space.

Dana Evernden ’12 is the only student since 2004 to question whether or not she could paint her own mural, making her permanent mark on the University of Massachusetts campus. In her senior year, Evernden asked around to figure out the process of getting her drawing approved in order to conduct her artwork in the stairwell between the third and fourth floors of the library. As she soon discovered, no one had asked to paint a mural in quite some time, so the process was a bit outdated and time consuming.

After nearly one full fiscal year of waiting, Evernden’s ideas were approved. However, approval didn’t mean someone was going to prepare her canvas for her in a timely manner, and she found herself waiting once again. When Evernden realized it was never going to get done until she did it herself, she did just that. Four days after her graduation she primed the walls and painted her mural as the last thing she did before moving out of Amherst.

Evernden originally came to UMass knowing nothing about marching band, but discovering that she wanted to give it a try. After three and a half semesters under the late George Parks’ direction, she was hooked. Parks sparked her interest immediately, and helped her interest grow into a passion.

Evernden even went on to become a part of a professional marching band. So naturally when she thought of what to paint for a mural, her marching band mentor was the first person that came to her mind. She toyed with two ideas: the first, of Parks, and the second of which was immediately shot down, “and rightly so,” she said. Her original idea was a larger-scale painting of a picture of a mouse flipping off an owl that was painted in basement of the Old Chapel).

“When George Parks first came to campus, many band members didn’t agree with him or like him. The mouse at first represented those band members flipping him off. Then it changed. People started liking him, but the mural was preserved under plexiglass as a reminder,” said Evernden.

Although both mural ideas represented Parks in different manners, her first idea was a less controversial, simple portrait of Parks. Evernden began research immediately to design the portrait of Parks. She searched through pictures of him on Facebook, stopping only when she came across a black and white photograph being used as someone’s profile picture. Evernden eventually identified the photographer as the Vicki Yozwiak, mother of a member of the band, then promptly called her to ask permission to use the photo in her mural. “Of course,” responded the mother.

Evernden spent three eight-hour sessions working on the mural, finishing it just in time before departing from Amherst for good. Although Evernden completed her mural, she left future library artists with a lesson from her experience.

“A word of advice, do it during a break when there won’t be tons of people walking up and down the stairs. Even though I only had to deal with a few people it was annoying squeezing right up next to the wall every time,” said Evernden. Although a break would be a more opportune time to work due to less foot traffic, Evernden noted that reduced hours may also present a challenge.

With Evernden’s mural, Parks is able to live on forever in one of the many stairwell murals of the campus library.

Students interested in displaying their artwork in the library stairwells should contact Anne Moore via email at amoore@library.umass.edu or by telephone at 413-545-6888.

Kiri Mullen is interning at the W.E.B. Du Bois Library this semester. She can be reached at krmullen@student.umass.edu.