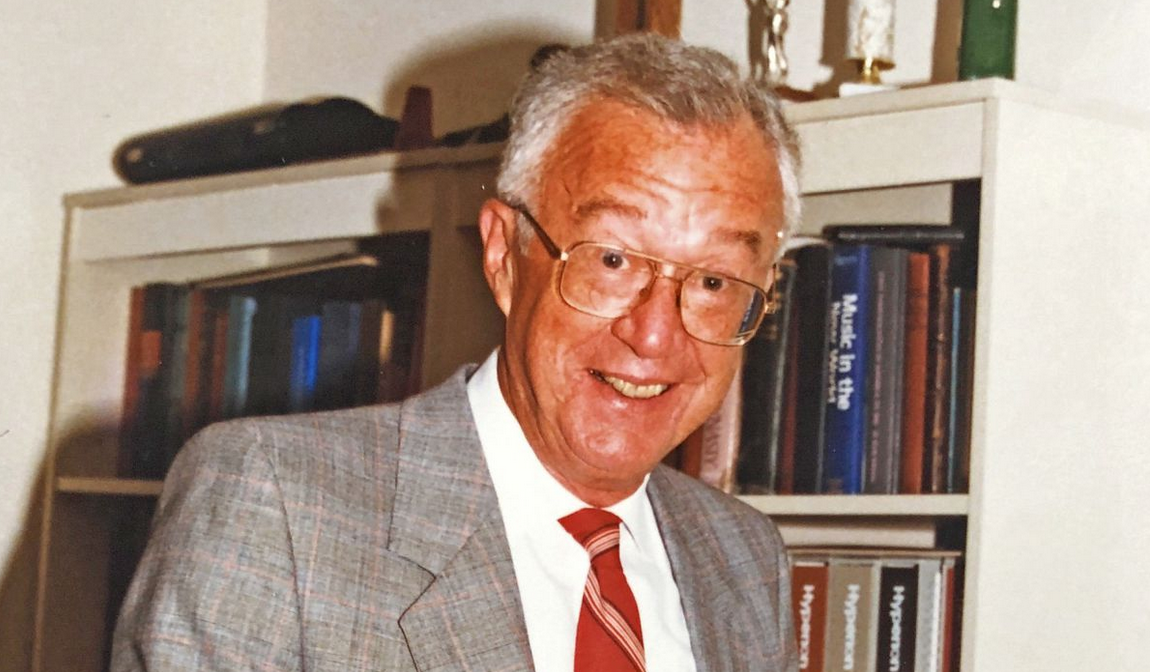 As published in the Globe and Mail.

Ezra Schabas, director of the Minuteman Band from 1949 to 1950, was a clarinetist, educator and principal of the Royal Conservatory of Music (RCM). Also an authoritative biographer and historian, Schabas died on Oct. 12 in Toronto. He was 96.

“Ezra Schabas was inquisitive, imaginative, daring, always open to new ideas and ultimately a builder,” said Peter Simon, president of the RCM. “These qualities led to his involvement in the beginnings of a number of foundational organizations and programs in Canada.”

Named professor emeritus in 1985 by the University of Toronto, where he served as chair of the performance and opera departments of the Faculty of Music from 1968 to 1978, Mr. Schabas filled a variety of positions with energy and dedication, including first president of the Association of Canadian Orchestras, editor of the Canadian Music Educator, president of the Arts and Letters Club of Toronto and music manager of the Stratford Festival.

Mr. Schabas’s intuitive understanding of pedagogy and the management of both music schools and orchestras was informed by experience as a professional musician in the 1950s and 60s with the CBC Symphony Orchestra and the Toronto Woodwind Quintet as well as work as a clarinet teacher. A lucid prose stylist, Mr. Schabas contributed to many journals and periodicals, wrote acclaimed biographies and served in the early 1960s as a freelance critic for The Globe and Mail.

Born on April 24, 1924, in New York City to a family in the restaurant business, Ezra Schabas acquired an artist diploma at the Juilliard School of Music in 1943 before serving in France and Germany with the Eighth Army Air Force Band of the United States military. Having played in the victory parade on V-E Day in Heidelberg, Germany, he studied at the Conservatoire at Nancy, France, before returning to New York to earn a bachelor’s degree (1947) at Juilliard and a master’s at Columbia (1948).

Employed as director of the Minuteman Marching Band at the University of Massachusetts Amherst and later as an assistant professor at Western Reserve University in Cleveland, Mr. Schabas in 1949 paid a visit to Toronto, where he heard conflicting reports about the RCM, the dominant music school not only of the city but of English Canada. Since his wife, Ann, was a native Torontonian as well as the daughter of Margaret Fairley, a prominent political activist, the city was the logical place to settle in 1952, when McCarthyism was at its height.

This was a time when the Conservatory, formally a part of U of T, was in the throes of a reorganization that would lead to the creation of a distinct Faculty of Music and School of Music as partners under the RCM umbrella. Mr. Schabas was both a participant in and observer of the various interactions of the Conservatory and Faculty over the ensuing decades. His 2005 volume There’s Music in These Walls: A History of the Royal Conservatory of Musicreads in part as a personal memoir.

His first job at the school was as director of the concert bureau, a position that put him in touch with some of the emerging talents of the era, including the tenor Jon Vickers, the soprano Lois Marshall and the pianist Glenn Gould, and gave him a firm grounding in the realities of concert life. It helped that Mr. Schabas was on good terms with both Arnold Walter, the Moravian-born musicologist who was director of the Faculty, and Edward Johnson, the Canadian retired tenor and former general manager of the Metropolitan Opera who was chairman of the RCM board of directors.

“It was the first time I had been close to a larger-than-life personality, and I relished it,” Mr. Schabas wrote of Mr. Johnson. “He would do much for the Conservatory in the next few years by presenting special programs of all kinds, usually with his own money, and he confidently entrusted me to administer them.”

These initiatives included a revived summer school with a workshop led by the Austrian-American composer Ernst Krenek and a special lecture series involving modern dance pioneer Martha Graham and composer/critic Virgil Thomson, among others. After decades of dominance by British-trained musicians, the RCM began to attract teachers and lecturers from continental Europe and the United States. Relations between the diploma-granting school (with an important national examination system attached) and the degree-granting faculty remained problematic, however, and Mr. Schabas’s initiative in creating a professional-track orchestral training program at the RCM in the late 1970s brought the issue of co-existence to a head.

“It was not, as they say, all sweetness and light in my years as principal,” Mr. Schabas wrote of his tenure from 1978 to 1983. “Some teachers were earning disproportionately large fees in summer schools and, to a lesser extent, in winter terms, by teaching large theory and history classes at substantial individual rates.”

Despite his efforts to curtail these excesses (and his success in reducing the RCM deficit) Mr. Schabas encountered resistance from the university administration as well as the RCM faculty. “I should have prepared the ground more carefully for such an important and consequential issue,” Mr. Schabas wrote, with characteristic candour, concerning the separation of the Conservatory from U of T, a break finalized in 1991 whose after-effects are felt to this day.

Among Mr. Schabas’s other commitments was work as the founding manager in 1960 of the National Youth Orchestra, an institution that became an important spawning ground for professional ensembles. In Stratford around this time he worked further with Mr. Gould, who was a regular visitor to the Schabas household. The relationship was sometimes fraught – the pianist took an unusually active interest in administrative affairs – but substantially convivial.

“We laughed all the time,” Mr. Schabas told the author Colin Eatock. “He had a very good sense of humour. [When] I compare him to other very fine musicians whom I’ve known – in most of them, the sense of humour is a little bit shaky, even non-existent.”

Mr. Schabas was the author of many influential studies, including a 1966 report on community orchestras commissioned by the Ontario Arts Council that recommended public support of such ensembles, many of which continue to thrive. He was active internationally, working as a consultant for conservatories and orchestras in Argentina, Brazil, Poland and Trinidad. He also taught at what is now called the Banff Centre for Arts and Creativity.

Formal retirement from U of T in 1985 led Mr. Schabas to a new chapter in his career, as a writer. First, in 1989, came Theodore Thomas: America’s Conductor and Builder of Orchestras, 1835-1905, a treatment of the German-born founding music director of the Chicago Symphony Orchestra that benefited from the author’s knowledge of orchestral operations, grounding in social history and keen insight into the nature of the artistic personality. The same could be said ofSir Ernest MacMillan: The Importance of Being Canadian, which won theCity of Toronto Book Award in 1995. This volume can be read as a cultural history of Toronto as well as a penetrating biography of the most influential musicians of English Canada.

Mr. Schabas collaborated with the former Faculty of Music dean Carl Morey to write Opera Viva (2000), a history of the Canadian Opera Company in which he once again drew on his first-hand knowledge of the Conservatory, where the COC had its beginnings. His last book was a 2007 biography of the Czech-born bass, director and actor Jan Rubes.

Dr. Richard Schabas said his father remained an enthusiastic tennis player into his 80s and a concertgoer until two years ago, when his health began to fail.

He leaves his wife, Ann, a former dean of the Faculty of Library and Information Sciences at U of T and the daughter of the late literary scholar Barker Fairley; five children (William, a professor of human-rights law at Middlesex University in England; Richard, the former chief medical officer of health of Ontario; Margaret, a professor of philosophy at the University of British Columbia; Michael, a London-based transportation consultant; and Paul, a judge of the Ontario Superior Court of Justice); 12 grandchildren and 11 great-grandchildren.