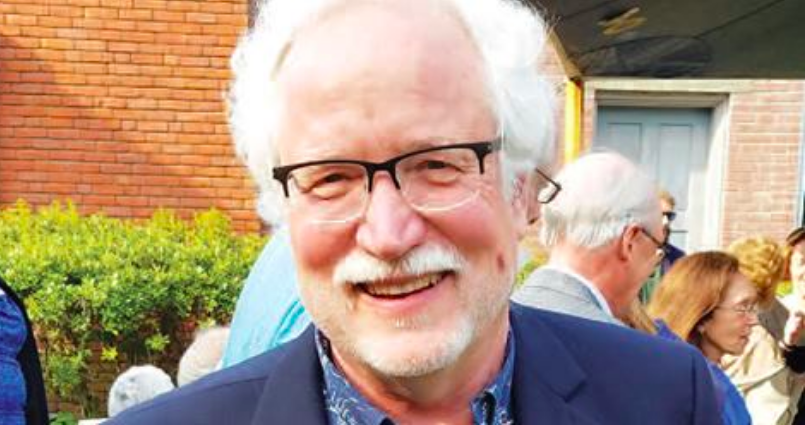 David Gagnon ’82 is an exuberant fellow with a quick smile and a delighted laugh, but you soon notice there is a sincere focus (or singlemindedness?) just under the surface. This is a man who gets things done… and enjoys every minute of it. He first came to Nantucket around 1982 as part of a team from the University of Massachusetts to research the growth and control of the spreading Scrub Oak at Lost Farm. He returned three-and-a-half decades later as the new Executive Director of the Maria Mitchell Association. Welcome back David!

David is originally from Brattleboro, Vermont, and maintains fond roots there. He studied Environmental Science at UMass (Amherst) with a specialization in Limnology (fresh water ecology). He continued his post-graduate education at the Yale School of Forestry. While at UMass he also played trombone in their Power and Class of New England Marching Band; when asked to divulge something that nobody knows about him, he mischievously admitted that he played the trombone at Reagan’s Inauguration… yep, he gave the Gipper the sackbut.

He has since lead a pretty full and fascinating career that has often branched far afield from the humble Scrub Oak. He was the Curator at the Cape Cod Museum of Natural History in Brewster, conducting research on coastal geology and vegetation at Coast Guard Beach in Orleans. He was codirector, along with his wife Shelley, of the Bonnyvale Environmental Education Center in Vermont, a family oriented center focusing on public education and citizen science, with a wide variety of school programs, summer camp, research, and special events. Both of these institutions, he enthuses, can provide a lot of inspiration for Maria Mitchell. He was also in turn an Environmental Engineer for Hertz, head of his own Environmental Consulting Firm (TRI-S) to advise and manage environmental pollution cleanup projects, and the Director of Operations for the Organic Trade Association during the start-off period of growth for that industry, involved in the creation of standards, regulations, and the promotion of organic products. He remains enthusiastic, even passionate: “If you ever have any questions about organics, really, anything at all, just call me!” While at the Trade Association, he was deeply involved in concluding our first Trade Agreement with South Korea… so all that Kimchee around… that’s probably his fault.

It was clearly exciting work, and rewarding, but David said he missed the education field and working with non-profits: “I was ready for a change.” When the opportunity arose in 2015 to become the Executive Director of our Maria Mitchell Association, he took the plunge. “It was a good time to do it. If I was ever going to try something like this, moving to an island, I was 55, it was now or never.” I can imagine broaching the subject with Shelley… “You’re thinking of doing what?” Actually, they were both intrigued, and Shelley encouraged him.

The Maria Mitchell Association presents exciting new opportunities and challenges. It is the third oldest non-profit on island (established in 1902), and features a very large and diverse program. They operate two observatories, a natural science museum, and an aquarium, in addition to preserving the birthplace of Maria Mitchell herself. They offer a wide variety of science and history-related programming throughout the year. They have a staff of 40 people, and a total of 100 volunteers and interns, comprising both students and adults, from on- and off-island. They receive around 200 applications each year just for the six openings for astronomy internships alone. No surprise there, since the astronomy program is superb and widely respected: of the 27 interns at work at Maria Mitchell, five or six go on for their PhD degrees.

When David arrived on the scene, he assessed the strengths and weaknesses of the organization, and decided he would first focus on promotion: too many people, both tourist and resident, do not fully understand what the Maria Mitchell Association is or what they do. This year in particular—the 200th anniversary of the birth of Maria Mitchell—David and his team are very busy with a yearlong schedule of activities, special events, and community outreach. They have co-produced a special exhibit on their namesake at the NHA Whaling Museum and are working on a program on plants at the Atheneum; an exhibit at the Pacific National Bank on Maria’s discovery of a comet (she had her telescope set up on their roof at the time); a symposium on “Women in Science” at Babson College; a Birthday Parade, and more.

This Sunday, June 3, they are hosting a family afternoon at Cisco Brewery featuring the launch of the signature “Comet Chaser” cocktail. Last week they held a ribbon-cutting ceremony to officially open the new Maria Mitchell Association Research Center, with updated classroom and research space as well as a state-of-the-art home for the MMAs biological collections. David is still busy planning a host of additional special pop-up events all season long…check the Calendar of Events in this publication and on Nantucket. net for dates and times.

How has it been adjusting from life in the rolling mountains of Vermont, to the confining sand dunes of an off-shore island? David and Shelley feel that “Nantucket is amazing! There is so much going on here, so many interesting things to do. Much more than Vermont. The Dreamland is terrific… the family membership is just amazing!” They also love the sense of place here: “it’s like stepping back 30 years.” They are also impressed by the closeness and friendliness of the community. It is, after all, a very small town on a small island. Although we live in the Age of Communication, where information is exchanged quicker than thought by ever more sophisticated technology… that technology would appear to be superfluous here on Nantucket: “News gets around here faster by word-of-mouth than any technology could compete. Everyone out here seemed to know us even before we landed on the dock.”

That can be both good and bad. Nantucket is a tight, supportive community, but if you are not familiar with living in a small town it might take some getting used to. And there is the remoteness… it can take an effort to get off the island. “Everyone here must be a very good planner… and weather watcher. It seems every time we need to go off, there’s always a storm.” Life is certainly different than on the mainland.

Among the things they like best about Nantucket is how it’s such a good place to walk and bike around. There are so many new places to discover and explore. He has been bitten by the arrowheading bug. Shelley and he also look forward to getting to know the harbor better. They have learned to scallop (and of course have developed their own secret new and improved techniques). David is also a self-professed novice sailor, and confessed that sailing out here is a lot different than sailing on a lake in Vermont. He has become an enthusiastic member of Community Sailing. He beams “It was the Best Birthday present EVER!” Now there’s a hint for spouses far and wide. We are looking forward to seeing what the Maria Mitchell Association has planned for us this season… and I for one am looking forward to seeing David out sailing in the harbor.