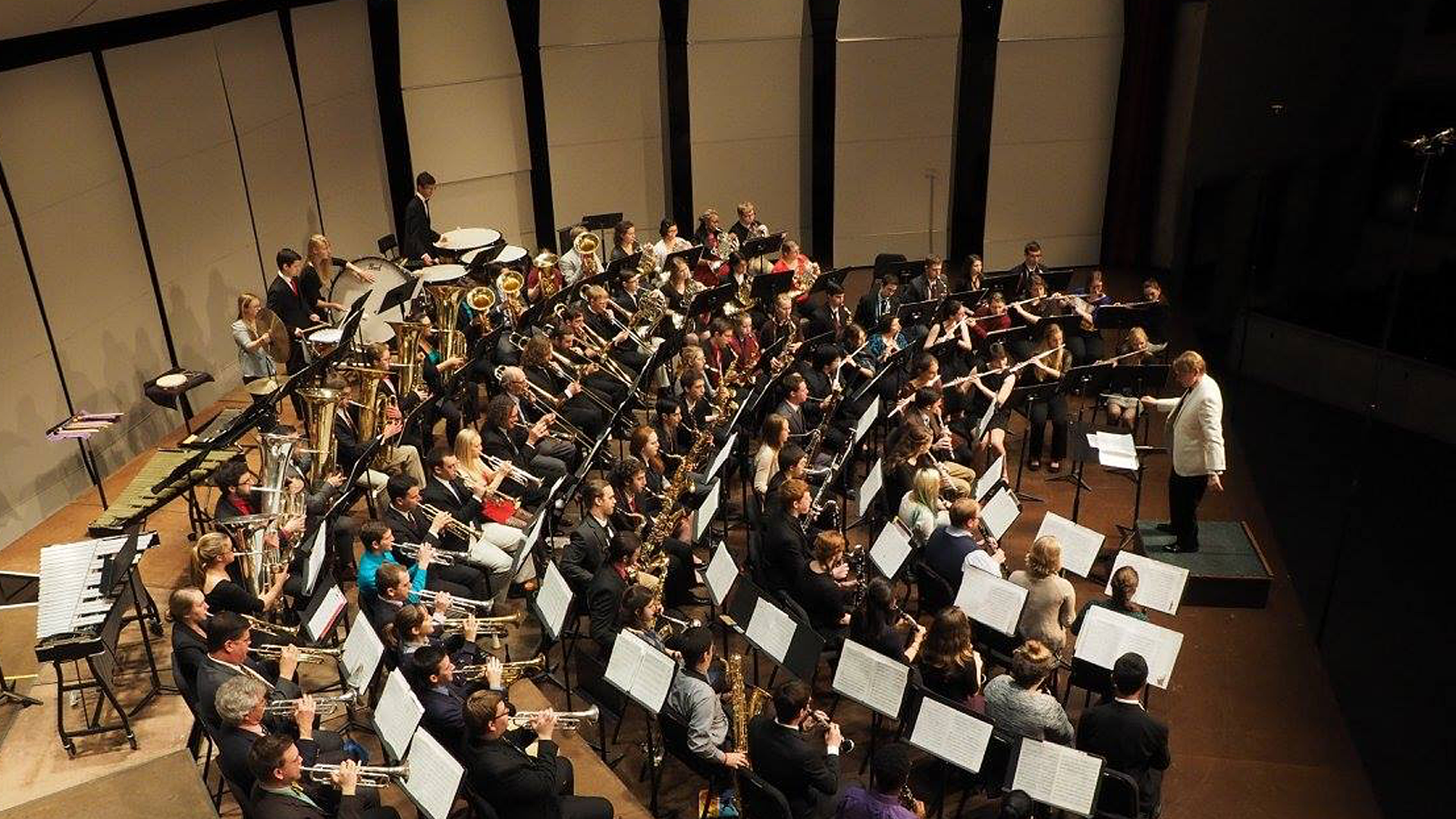 The UMass Concert Band featured the world-premiere of “G.P.,” written in memory of former Minuteman Band director George N. Parks, Sunday, April 2 in the Fine Arts Center Concert Hall. Nearly 1,000 UMMB alumni, family, and friends attended the performance, which was followed by a reception in the newly renovated Old Chapel.

Led by conductor Timothy T. Anderson, the Concert Band provides its members with the opportunity to perform a wide range of repertoire from marches to Broadway standards to Mozart. Although the group draws many of its members from the Minuteman Marching Band, all UMass students are welcome to participate.

“G.P.” was composed by director of jazz studies Jeffrey W. Holmes. Thom Hannum, longtime associate director of the Marching Band, conducted the work. In comments before the premiere performance, Hannum noted he began each rehearsal of the piece with a Q&A with band members to better understand the man the piece honors.

“Energy, enthusiasm and excellence” are the 3 Es of the University of Massachusetts Minuteman Marching Band. They also could be used to describe the man who originated them, Prof. George N. Parks. Professor Parks came to UMass in 1977, at the age of 24. He had just completed a degree in tuba performance at Northwestern University, where he served as graduate assistant to famed Director of Bands, John Paynter. Parks earned his undergraduate degree at West Chester University, where he was drum major of the Golden Rams Marching Band. Professor Parks was not only the director of the Minuteman Marching Band, but a concert band conductor, tubist, and for many years both a member of the UMass Faculty Brass Quintet and the applied tuba studio professor.

Prof. Parks built the Minuteman Marching Band from a group of approximately 100 members to one that approached 400 in size. He established the bands’ showmanship style, created the family that members ‘ value, gave the band the moniker The Power and Class of New England, and established many beloved traditions that remain today. Under Prof. Parks, the UMMB performed in 3 Presidential inaugural parades and made multiple appearances at the Bands of America Grand Nationals. Perhaps the program’s greatest moment came in 1998, when the Minuteman Marching Band was awarded the Sudler Trophy, which is the highest award a collegiate band can achieve. Prof. Parks was additionally honored with the University’s Distinguished Teaching Award, the Chancellor’s Medal for Distinguished Service, and the Bands of America Hall of Fame, amongst other distinctions. The Minuteman Marching Band, Concert Band, Hoop Band, Marimba Band, and other groups are housed in the George N. Parks Minuteman Marching Band Building.

Prof. Jeffrey W. Holmes has been a part of the UMass music faculty since the Spring of 1980. He is the director of the Jazz and African-American Music Studies program, and directs the award-winning Jazz Ensemble I. As a composer, Prof. Holmes has written for jazz ensembles, concert bands, marching bands, and many other ensembles, including the UMMB. Prof. Holmes and Prof. Parks enjoyed a friendship of many decades, as they both joined the UMass faculty around the same time and were similar in age. G.P. was born out of a mission by the Epsilon Nu chapter of Kappa Kappa Psi and the Delta Delta chapter of Tau Beta Sigma to commission a work to honor the memory of Prof. George Parks. Because of their longtime friendship, Prof. Holmes was a natural choice.

The name G.P. refers both to the musical term “grand pause” which occurs frequently throughout the work, and also to the initials of George Parks. There are a number of stylistic influences. The beginning theme is performed in a hymn-like setting, also drawing scoring influences from English folksongs (but is entirely original). There is an ascending line that leads to the middle section, which presents brief musical reflections/recollections of life episodes and provides individual representatives of the ensemble to musically “speak” on behalf of their peers and those before them, including a brief drum-line reference. A thickened return to the original melody is the gateway to a more dramatic section, intended to sound familiar to the Minuteman Marching Band. Though nothing is quoted, you may fmd it similar to themes beloved of UMMB alumni. A familial quartet of instruments initiates the return of the ascending line ultimately dissipating to a lone ethereal piccolo.

It is equally important that Professor Thomas P. Hannum conduct the premtere of this work. Prof. Hannum first came to UMass as a graduate student, and worked with the percussion section of the marching band. He then became a full-time employee of the University, founding the UMass Hoop Band, and growing the marching percussion curriculum. He also directs the UMass Marimba Bands and Ensembles. Prof. Parks and Prof. Hannum collaborated beginning in 1981. We believe the combination of Prof. Holmes and Prof. Hannum, who both knew Prof. Parks so well, adds more meaning to this tribute to his life.