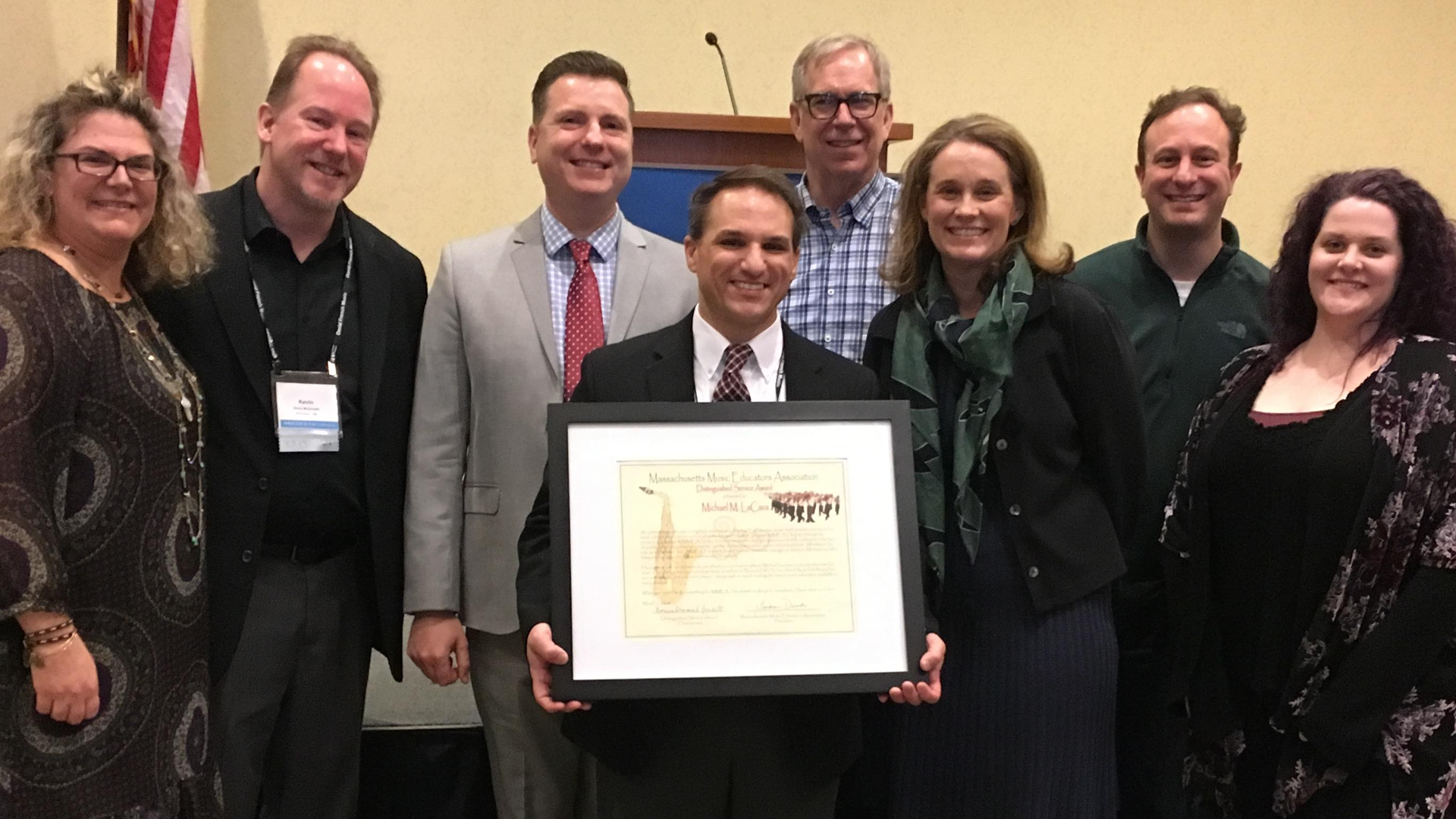 Some lucky people know early on what their call will be in life. Mike LaCava ’92 is one of them.

“I always knew I wanted to be a teacher, ” said LaCava, who has been Wellesley Public Schools’ K-12 director of performing arts since July. As a young man, he excelled in music, and was able to combine his interests into a career that he loved. At UMass Amherst, where he played saxophone in the Minuteman Band before becoming Drum Major, the music education major co-founded the collegiate chapter of MMEA.

“I’ve been very fortunate to have a great career so far,” he said Monday.

Last Friday, he received external validation of his career path when he was presented with the Distinguished Service Award from the Massachusetts Music Educators Association (MMEA). It’s considered one of the most prestigious music education awards in the state.

But despite his short tenure in Wellesley, LaCava already had plenty of internal applause coming his way.

Kevin McDonald, Wellesley High School’s director of choral activities, and LaCava got to know each other while serving on an MMEA board. Since then, he said, he had seen LaCava serve MMEA ” with class, enthusiasm, energy, and passion.” He said LaCava “is more than deserving of MMEA’s most prestigious award.”

During LaCava’s six years as president elect, president, and past president, “he took the reins of an organization that was facing considerable adversity,” McDonald said. “Michael did not flinch and helped guide MMEA and its members in positive decision making, creative problem solving, and tireless service to improve the status of the organization and Music Education throughout our state.”

Darlene Howland, president of Wellesley POPS (Parents of Performing Students), said in an email, “From our first meeting last summer, Mike demonstrated a deep understanding of school systems, performing arts needs and a strong commitment to excellence in education. He is a supportive collaborator who brings an engaging personality and strong interpersonal skills to every encounter, In his short tenure at WPS, Mike has already shown that he is a ‘difference-maker’ who will work hard to ensure that performing arts students and faculty have the materials and support they need to reach the highest standards of excellence.”

LaCava was more than a little surprised when he learned he won the award. A retired Needham educator with whom he has volunteered over the years had nominated him, but he didn’t know that and didn’t think much about it when she asked for an updated resume.

Once he did know he’d won, he tried to keep the news quiet, reasoning that he had barely arrived in Wellesley. But word gradually leaked out, and people have “been wonderful about supporting and celebrating the accomplishment,” he said.

On Friday, several of them “all traveled in the monsoon rain to the ceremony” at the All-State Conference in Boston. “In a short period of time we’ve created such a professional relationship,” he said.

He doesn’t come from a particularly musical family, although both of his grandparents played instruments and one played the saxophone. One of his own three kids, a sophomore, plays in the high school band school band, and his eighth-grader plays drums. (The 6-year-old hasn’t demonstrated his musical preference yet.)

The Wilmington native and his family live in Chelmsford, where LaCava worked for several years, beginning as Fine and Performing Arts Coordinator. He said his wife, Jessica, “just supported me throughout this whole process.” This includes not just his work in Wellesley and MMEA, but a variety of other activities, such as serving as a guest conductor at various festivals, teaching graduate courses and conducting the Fitchburg State University Concert Band. (He earned his master’s degree in education leadership and management at Fitchburg.)

Still in his 40s, LaCava says he hopes he has a lot more years to contribute. The award is a nice recognition of the body of work he had done so far, “and hopefully I can expand on that.”