George N. Parks, who passed away on Sept. 16, touched thousands of lives through his Drum Major Academy and 33 years as director of the University of Massachusetts (UMass) Minuteman Marching Band. One UMass drum major shares personal memories and lessons learned from his mentor. 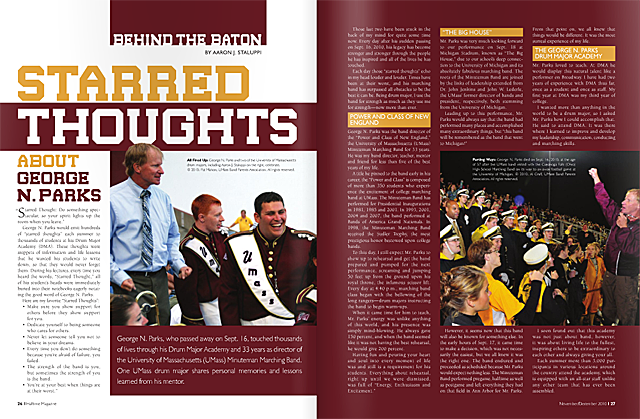 “Starred Thought: Do something spectacular, so your spirit lights up the room when you leave.”

George N. Parks would emit hundreds of “starred thoughts” each summer to thousands of students at his Drum Major Academy (DMA). These thoughts were snippets of information and life lessons that he wanted his students to write down, so that they would never forget them. During his lectures, every time you heard the words, “Starred Thought,” all of his students’ heads were immediately buried into their notebooks eagerly notating the good word of George N. Parks.

Here are my favorite “Starred Thoughts”:

Those last two have been stuck in the back of my mind for quite some time now. Every day after his sudden passing on Sept. 16, 2010, his legacy has become stronger and stronger through the people he has inspired and all of the lives he has touched.

Each day those “starred thoughts” echo in my head louder and louder. Times have been at their worst, and his marching band has surpassed all obstacles to be the best it can be. Being drum major, I use the band for strength as much as they use me for strength—now more than ever.

Power and Class of New England

George N. Parks was the band director of the “Power and Class of New England,” the University of Massachusetts (UMass) Minuteman Marching Band for 33 years. He was my band director, teacher, mentor and friend for less than five of the best years of my life.

A title he pinned to the band early in his career, the “Power and Class” is composed of more than 350 students who experience the excitement of college marching band at UMass. The Minuteman Band has performed for Presidential Inaugurations in 1981, 1985 and 2001. In 1993, 2001, 2004 and 2007, the band performed at Bands of America Grand Nationals. In 1998, the Minuteman Marching Band received the Sudler Trophy, the most prestigious honor bestowed upon college bands.

To this day, I still expect Mr. Parks to show up to rehearsal and get the band prepared and pumped for the next performance, screaming and jumping 50 feet up from the ground upon his royal throne, the infamous scissor lift. Every day at 4:40 p.m., marching band class began with the bellowing of the long rangers—drum majors instructing the band to begin warm-ups.

When it came time for him to teach, Mr. Parks’ energy was unlike anything of this world, and his presence was simply mind-blowing. He always gave 150 percent, and when the band seemed like it was not having the best rehearsal, he would give 200 percent.

Having fun and pouring your heart and soul into every moment of life was and still is a requirement for his students. Everything about rehearsal, right up until we were dismissed, was full of “Energy, Enthusiasm and Excitement.”

Mr. Parks was very much looking forward to our performance on Sept. 18 at Michigan Stadium, known as “The Big House,” due to our school’s deep connection to the University of Michigan and its absolutely fabulous marching band. The roots of the Minuteman Band are joined by the links of leadership extended from Dr. John Jenkins and John W. Lederle, the UMass’ former director of bands and president, respectively, both stemming from the University of Michigan.

Leading up to this performance, Mr. Parks would always say that the band had performed many places and accomplished many extraordinary things, but “this band will be remembered as the band that went to Michigan!”

However, it seems now that this band will also be known for something else. In the early hours of Sept. 17, it came time to make a decision, which was not necessarily the easiest, but we all knew it was the right one. The band endured and proceeded as scheduled because Mr. Parks would expect nothing less. The Minuteman Band performed pregame, halftime as well as postgame and left everything they had on that field in Ann Arbor for Mr. Parks. From that point on, we all knew that things would be different. It was the most surreal experience of my life.

Mr. Parks loved to teach. At DMA he would display this natural talent like a performer on Broadway. I have had two years of experience with DMA thus far, once as a student and once as staff. My first year at DMA was my third year of college.

I wanted more than anything in the world to be a drum major, so I asked Mr. Parks how I could accomplish that. He said to attend DMA. It was there where I learned to improve and develop my leadership, communication, conducting and marching skills.

I soon found out that this academy was not just about band, however, it was about living life to the fullest, inspiring others to be extraordinary to each other and always giving your all.

Each summer more than 3,000 participants in various locations around the country attend the academy, which is equipped with an all-star staff unlike any other team that has ever been assembled.

Mr. Parks and I met when I was an undeclared freshman at UMass Amherst with the intent on becoming a music education major. I auditioned twice before being accepted into the music program. In the spring, he learned about my unsuccessful first audition and approached me about private lessons. We met once a week.

With hard work, persistence and practice, my next audition was successful, and I owe it all to him.

During our lessons, he would mention how he should pick up his horn more and “get back at it.” For the past two years at DMA, he had been performing solo excerpts for the students. This past spring, he went to Texas to perform a tuba solo with a high school symphonic band and did the same at Salem High School here in Massachusetts.

When the subject of playing tuba came up, he would turn, look at me and say, “It’s all your fault.” I was astounded when I looked at the Department of Music and Dance calendar earlier this year to see “Faculty Recital—George Parks” entered in the database for April 2011. I was really looking forward to that performance.

Despite the loss of Mr. Parks, the band is continuing on with the season in fantastic fashion.

I will say that being drum major of the organization that Mr. Parks has built has been an honor, and I am glad to share that position with Sean Donnelly, Bonnie Harper and John Mange.

Oct. 16 was Homecoming at UMass Amherst. A mass band assembling more than 1,200 students—including 900 alumni going as far back as Mr. Parks’ first UMass band in 1977—took the field in the Celebration of the Life and Legacy of George N. Parks. It was truly a special place to be and a special moment to experience.

This date has been chosen by Gov. Deval Patrick as “George N. Parks Day,” with flags lowered to half-mast in his honor.

Mr. Parks’ final performance was the evening of Sept. 16, 2010, in Cuyahoga Falls, Ohio. The last piece he conducted was “My Way,” our traditional closing piece, and his last words to me as I took the podium in Ohio were: “Now remember, having fun is just as important as anything else that we do.”

George N. Parks did spectacular things with his life, and his spirit will forever light up the hearts and souls of the thousands of lives he has touched.

Aaron J. Staluppi (far right in photo) is a senior at the University of Massachusetts Amherst, majoring in music education and tuba performance. He currently serves the University of Massachusetts Minuteman Marching Band as one of four drum majors for the 2010 season. He performs with the Wind Ensemble and University Orchestra and is a member of the Epsilon Nu Chapter of Kappa Kappa Psi, National Honorary Band Fraternity.