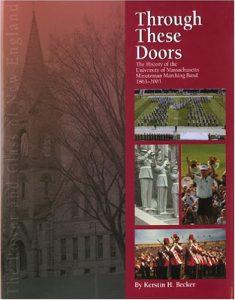 This one time… at band camp…

Yeah, we all joke about band camp stories. And how many band stories have you heard — or told — a million times? Well, we want to preserve them!

Whether you were a Precisionette, a member of Spitfire, got your tuba case crushed in an airport, there are endless stories around what makes the Minuteman Marching Band the Power & Class of New England!

Assistant director of the UMMB, and band alumna Chris (McHugh) Sirard ’90 is collecting your stories. Chris is working with the UMass Amherst Libraries to ensure we capture archival-quality audio with a high-end digital recorder. If you’ve listened to StoryCorps on NPR, that’s the format.

So, how can you participate?

Email Chris to set-up an appointment, or keep your eyes on the band alumni event calendar. Chris does her best to make time before or after events to be available to listen to (and record!) your stories! Stories will archived at UMass Amherst’s W.E.B. Du Bois Library and will be made available online.

Key figures in the growth of the Minuteman Band were interviewed about their UMass experiences. Recordings are archived at the Du Bois Library.

Here are their stories:

John Jenkins
JJ’s experience at UMass, the growth the UMass Band, and the development of the music program. Interviewed by band alum Rusty Annis.

Bernie Pitkin ’66
Bernie discusses his experiences as both an undergraduate and an graduate student at UMass Amherst.

James Collins ’68
Jim discusses his love of the trombone, the impact of the UMass Band at the 1964 Tangerine Bowl, the Alumni Band, and the legacies of John Jenkins and George Parks.

Jacob Epstein ’69
Jake’s experience as a clarinet player in the UMass Band and his later experience teaching in the UMass music department. Interviewed by fellow band alum Rusty Annis.

Thomas Parker ’72
Tom talks about flunking out of the music department and the founding of the UMass chapter of Kappa Kappa Psi. Interviewed by band alum Rusty Annis.

Stan Rosenberg ’77
Stan’s experience as a tuba player, the development of the UMass chapter of KKΨ (along with Tom Parker ’72), and his time working at UMass and in the State Senate. Interviewed by fellow band alum Rusty Annis.

Thom Hannum ’84MM
Thom talks about his college days with George Parks, his background in music and drum corps, and the development of the Minuteman Band. Interviewed by band alum Mike Holmes ’10.

Lloyd Henley ’90
Lloyd’s experiences as both a student and as the associate director of student activities at UMass Amherst. Interviewed by fellow band alum Rusty Annis.