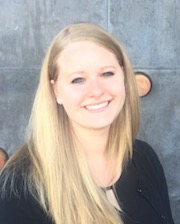 Dana marched mellophone in the Minuteman Marching Band while she earned a Bachelor in Music at UMass Amherst. She earned her Master of Music degree in Music Education at Arizona State University. As a graduate student at ASU, Dana served as hornline instructor for the Sun Devil Athletic Band program. Dana is also an accomplished French hornist and performed as a member of the horn studio at ASU.

Dana’s experience in the marching arts is extensive. She has taught many different marching bands, most notably the University of New Haven (CT), South Brunswick High School (NJ), and Woodbridge High School (NJ). She has also been a visual staff member for several drum and bugle corps in recent years, including the Cadets2 (DCA), Bushwackers (DCA), and Raiders (DCI). As a marching member, Dana played mellophone with Carolina Crown (2007) and The Cadets (2008-09).