Stephen Kellogg and the Sixers (or SK6ERS, as they are affectionately known by their fans) are known for their rambunctious live shows. So when they played a homecoming show at the Calvin Theatre in Northampton Thursday night, they wanted to make it extra special — and what is more special than a marching band?

Kellogg and his three-man band were joined by about 25 members of the 400-piece University of Massachusetts Minuteman Marching Band, and while their presence provided a celebratory feel to the evening, there was a touch of sadness in the air as the show was a tribute to the marching band’s director and close Sixer friend, George Parks, who died last month.

Stephen Kellogg shares his memories of planning this show:

This idea was really George’s. When we shot the music video for “Shady Esperanto and the Young Hearts” last summer, it was George who pushed through the red tape to make it happen. After that he said ‘what else?’ he was that sort of guy, not one to rest on his laurels…so we started dreaming up a show, the where, the when, the how…one night John Sanders and Eric Suher suggested that the Calvin would be great and I was an intern at IHEG when the Calvin re-opened in the late ‘90s, so that sounded like a thrill to me. I hit up George with the idea and he loved it. I still have a bunch of emails from George on my computer saying things like ‘this will be great…but we’ll talk later about the details.” I can’t yet bring myself to delete them.

Kellogg met his band mates while he was a student at UMass and later formed the Sixers in Northampton in 2003. SK6ER Keith “Kit” Karlson ’98 is a Minuteman Band alum. 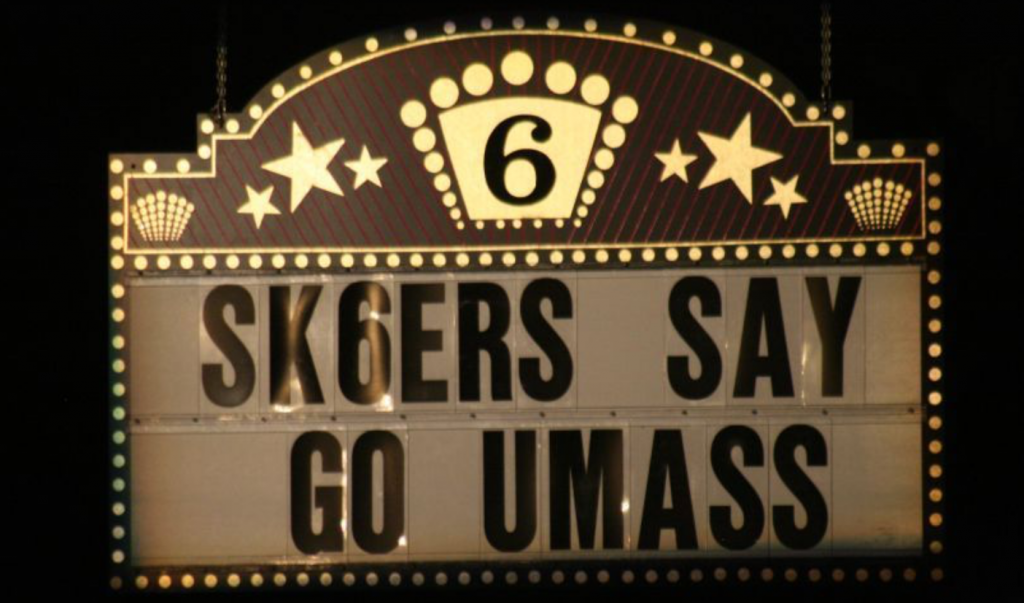 While the night started off a bit slow with sentimental numbers like “Father’s Day” and “Sweet Sophia,” this all changed when the UMass drum section marched onstage during their fourth number, “Start the Day Early.”

Sam Getz’s pedal steel guitar, combined with the marching band’s woodwind section, added a nice texture to “Such a Way,” and the entire band later crammed on stage for “Shady Esperanto and the Young Hearts.” The Sixers and their audience fed off the sonic overload.

Multi-instrumentalist Kit Karlson got in the sprit by busting out his tuba during “The Bear,” and all the Sixers ran about the stage playing each other’s instruments during “Uninspired Gambling.”

But it wasn’t all booming drums and baton twirlers as Kellogg, whose voice was a bit ragged from a cold, took the stage alone for the easygoing “Satisfied Man.” He was then joined by his band mates for the obligatory unplugged portion of the show, which included a countrified version of Pearl Jam’s “Even Flow.”

After closing with “Milwaukee,” the band went all out for its two-song encore.

A version of “Thirteen” segued into Young MC’s “Bust a Move,” with Karlson providing some fine rapping and impressive dance moves of his own. Then it was time for a half-time show as the Minuteman Marching Band returned for a blaring version of “4th of July” that featured a parade of flag wavers marching down the aisles.

After a no-holds-barred finale like that, the Kellogg and the Sixers soon gathered around a single microphone for a quite version of “Curtain Call.”

The SK6ERS and the UMMB got together again a few weeks ago for a special halftime performance at the UMass-William & Mary game.

The Pioneer Valley Club of the UMass Amherst Alumni Association hosted a pre-show gathering inviting alumni from across campus to celebrate.