One time, at band camp

‘I will accept five push-ups from you,’ the drill instructor said to a newbie squad member who broke from formation. The newbie was one of 400 souls training in the blazing August sun at the University of Massachusetts Thursday, preparing for battle. He dropped to the ground to perform the exercise and, without being asked, the remaining 399 members of the squad assumed the position, grinding out the push-ups together in the heat because they believe in the strength of the group.

Who is this tough bunch? ROTC? Nope. Football team? Nay. OK. It must be the karate club? Negative.

It’s the UMass Minuteman Marching Band, an elite crew of musicians who seem ready to jump in front of a bus if it would preserve the honor of their team, fellows or illustrious leader and benevolent drill instructor, George N. Parks.

This afternoon, the marching band will take to the gridiron with the UMass football team, playing their standard, ‘Fight Mass,’ as the Minutemen take on the Holy Cross Crusaders in the opening game of the season.

The game comes at the end of a grueling week of training for the band, longer for some members, as its ‘Band Camp’ wrapped up Friday.

Don’t be fooled by the name ‘Band Camp,’ either, a phrase made infamous in the lascivious ‘American Pie’ films (in which ‘one time, at band camp …’ is a recurring phrase). According to band members, there’s no partying, debauchery or infantile shenanigans: Band Camp is all business.

‘You’re representing the band whether on field or off,’ said Jimmy Verdone, a 22-year-old music education major from Brockton who is the band’s equipment manager.

Camp starts bright and early at 8 a.m., and doesn’t finish until about 11 p.m., when the lights go out on the fields next to Mullins Center, where they practice, said Bogdan, 19, of Neptune, N.J., a sophomore with a double major in mechanical engineering and classics. 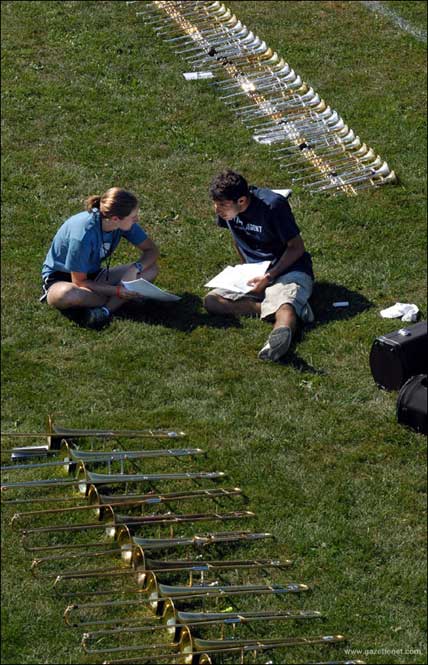 The band practices formations and musical numbers separately throughout the day, and by nighttime puts them together. When camp finishes for the day, most are too tired to throw a keg party, said Katie Czarnecki, 20, of Salem, a drum major for the band studying music education. (Drum majors, by the way, don’t play drums. They lead and conduct.)

Further, wearing the proverbial lampshade is not something a UMass marching band member would do, as it would tarnish the band’s image and its motto, ‘power and class.’

The band consists of veterans and freshmen, but members say dedication to their group brings them together in a way that few experience at a college or university, especially for a newcomer.

‘Because you spend so much time with people in the marching band, they become like a second family to you,’ said Bogdan. ‘It’s like getting 400 friends right off the bat. It’s a great thing to be able to walk across campus (at the start of school) and see people you know, and say, ‘Hey, I know you.’

When the semester begins, the band will meet daily from 4:40 to 6:10 p.m. for practice, part of the marching band seminar, a graduate-level class that fetches two credits. Besides playing at every home game, the band also travels six to seven times a year, performing at other schools with the Minutemen football team and at exhibitions. It takes nine buses to carry all the members and their gear.

A marching band drum major from Point Pleasant, N.J., Amanda Woolley, 21, studies music education at UMass. She said the dedication that the band members exhibit while playing also carries over to academics.

‘Because of the commitment here, you’re automatically able to succeed in college,’ Woolley said. ‘Even though you’re doing hours and hours of work with the band, it gives you confidence and ability.’

The marching band also aims to have its members succeed in life, said Verdone.

‘We’re always pushing people forward for them to be the best they can be,’ said Verdone. Also, teamwork is key for the band, just like a sports team, in which everyone contributes to a common goal.

Verdone said he believes that UMass Minutemen football team needs the band to keep the team and the crowd at fever pitch.

‘I think it’s crucial,’ said Verdone. ‘When they see the excitement and enthusiasm that we have, it pumps them up.’

‘At minimum, they know they have 400 fans every week,’ added Bogdan.

David Prevost, 23, of Avella, Pa., is on the 6.5-year plan at UMass. A music education major, Prevost plays the tuba as one of the band’s co-section leaders, and said that the band has such a hold on its participants that even past members – some as far removed as 20 years – have called him to ask how it’s going.

And just as intense as the band’s commitment is the level of happiness among its members.

‘These are some of the happiest people of campus,’ said Bogdan.

Prevost added, ‘We’re the only (group of) people who can be excited to sleep on a gym floor,’ referring to the spartan accommodations that the band often ‘enjoys’ on its road trips.

One of the band’s past members who is still crazy for the UMass marching band is Heidi Sarver, a former student member of the marching band who received a music education degree in 1986 and a master’s of music in performance in 1988. Between 1984 and 1987, Sarver was a trumpet soloist, drum major and show designer for the band.

Now, Sarver is the director of the University of Delaware Marching Band. But she has hardly left UMass.

‘Since 1986 I have been one of the primary show designers for (the band),’ said Sarver in an email interview.

‘Each summer Mr. Parks simply asks if I can write for the band and more often than not, the answer is, ‘of course!’

For Sarver, she said it is the UMass marching band’s love of performing, the love of working together for the benefit of the whole, and the passion of performance that all marching bands first think to emulate.

‘But it is the friendships, life skills and the living of each day to the fullest that are perhaps the most important lessons I learned as a member of the Minuteman Marching Band and as a current, yet distant, staff member that I strive to instill in my program here at UD,’ said Sarver.

Greg Walters, 21, plays tenor saxophone and is a co-section leader in the band.

All the members of the band cite one person as its linchpin: George N. Parks, known to all who play for him as ‘Mr. Parks.’

‘In describing what a drum major and/or band leader must be, he says, ‘The band is your mirror.’ Everything that the band does is a direct reflection of the band director. So Mr. Parks is positive, respectful, determined, committed and dedicated to his craft and his students,’ said Sarver.

But Sarver said, ‘There is another side to this man that many never see nor would expect, because all the public sees is an energetic, intense, wild and crazy man on the podium who is capable of getting the most stoic person to stand up and dance.

‘This other side is humble, quiet, very shy and reserved. He is perhaps the most forgiving person I have ever known and to this very day I still have to work incredibly hard to match his level of humility. George Parks always puts the needs of others before his own,’ Sarver said.

Said Bogdan, ‘I don’t think I’ve ever heard him yell. He just wants to make you better.’

Parks said Friday that this year’s band campers achieved more than any other in his nearly 30 years as chief of the band.

Beyond work ethic and commitment, Parks said he believes members of the band will leave school with something even more important: lifelong friends.

‘We kind of have a special thing here,’ said Parks.

‘I’m very proud of what they’ve been able to accomplish.’

Drum Major Academy featured on NPR’s “Only A Game”

Bando is up for MTV Best Music Award